Frank Barroby didn’t choose a life at the racetrack as much as the life chose him. Born in Saskatchewan, Barroby grew up around horses as one of 12 siblings, including horsemen brothers Harold and Larry. At age 15, Frank started galloping horses in Alberta before finally riding his first winner in Winnipeg in 1961. He then rode on the prairie circuit before moving to Ontario and finally on to Vancouver in 1968.

His natural skill as a jockey was on display the year after his lost his ‘bug’, winning 78 races in 42 days at Assiniboia Downs. His win total increased yearly for the next three seasons and he actually finished second in Canada in 1965 with 182 winners. “I should have been leading rider that year,” he recalls. “But statistics weren’t available then like they are now. I had decided to take some time off to go hunting. Had I known at the time that I was ahead in the jockeys’ standings, I wouldn’t have gone hunting and went to Woodbine sooner. Instead, I lost by five wins to Hugo Dittfach. You know, I try not to think of stuff like that.”

Frank was the leading rider in his first year at Hastings, in 1968 with 91 victories. He was at or near the top of the jockey standings for the next eight years; retiring as a rider in 1976. His illustrious jockey career was highlighted by winning riding titles in four provinces — Alberta, Manitoba, Saskatchewan and British Columbia, still a racing record. He once rode future HOF inductee Victorian Era in a race at Fort Erie, the Fair Play Stakes. Barroby was replacing a riding great, the injured Avelino Gomez. Ironically, both Barroby and Victorian Era were inducted into the Canadian Horse Racing Hall of Fame in 2010.

In 1978, after years of battling the scales and trying to maintain proper riding weight, he retired and began training horses. In 1986, 1990 and 1993, Barroby led all trainers in winners at Hastings and has won more than 900 races. Barroby also helped launch the careers of some top jockeys, including Dave Wilson, a double Sovereign Award winner as the leading apprentice in 1994 and 1995 in Canada, and U.S.-based Jeff Burningham. Wilson said, “If it wasn’t for Frank taking me under his wing, there was no way I would have gotten the chance to become a jockey.”

However, it’s as a trainer that the 66-year-old Barroby is better known. Prior to 2010 he had won 49 stakes races at Hastings. His most successful runner was Peter Redekop’s Astro Beauty, a winner of 14 races out of 22 starts and who was named B.C.’s Horse of the Year in 1993. His other winners include Air Flight, Arctic Shadows, Bacus, Insecutor, Lady’s Excuse and Sheza Shiningstar. He was leading trainer there in 1986, 1990, and 1993. He is the only one to be both (a) leading jockey and (b) leading trainer at Hastings.

Last year, Frank Barroby was elected into the B.C. Thoroughbred Hall of Fame, joining his younger brother Harold. Barroby is also proud of the fact that he has become the first B.C. – based trainer to receive induction into Canada’s Hall of Fame. When it was announced that Barroby had been named a finalist in the Jockey/Trainer category, horsemen in British Columbia were curious as to what category — jockey or trainer. His nomination came in the latter department. 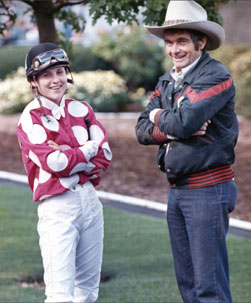