Even better, the former cattle baron and current standardbred owner and breeder was joined in the Canadian Horse Racing Hall of Fame’s class of 2010 by rookie stallion Mister Big, who stands at Heffering’s Tara Hills Stud in Port Perry, ON, an outfit run by Heffering’s son, David.

Today, Tara Hills is one of Canada’s premier standardbred breeding operations, standing 11 studs. A short distance away, in the farm office, is an impressive reminder of Peter’s success as a horse owner. A long trophy case stretching the length of an entire wall, displays some of the most precious spoils the sport has to offer.

Considering Peter only owned standardbreds beginning in 1989, it’s an even more impressive haul.

Heffering first made a splash in agriculture as a breeder of Holstein cattle. “His Hanover Hill Holstein herd was arguably the most famous Holstein herd in the world for many years,” says his bio in the Canadian Agriculture Hall of Fame. Heffering became particularly proficient at artificial insemination and his Hanover Hill Starbuck “produced over 60,000 daughters in Canada alone. The influence of Hanover Hill bloodlines is obvious as 92 per cent of all heifers born and raised in Canada in the five years up to 2009 carry the pedigree. Hanover Hill was very successful in show rings throughout North America, being the only herd to win six Supreme Champions at the World Dairy Expo.”

Heffering dispersed all of his cattle holdings in the summer of 1998 and turned to racehorses when he purchased an Argentinean mare named Lion Norb Victory. The mare made just shy of $100,000 racing as a five- and six-year-old in North America. A year later, Heffering bought Precious Bunny as a two-year-old for $125,000 and the rest was history. Precious Bunny was inducted into the Canadian Horse Racing Hall of Fame in 2004 after becoming the first horse to win the North America Cup, Meadowlands Pace and Little Brown Jug, earning over $2.2 million along the way. Heffering also has owned, either in whole or in part, the stellar pacers Riyadh ($2.7 million) and Pacific Rocket ($2.3 million), as well as trotters Kadabra ($2.1 million), Strong Yankee ($1.5 million) and 2006 Canadian Horse of the Year Majestic Son ($2 million).

Born in the state of New York to Canadian parents, Peter earned a degree in Animal Husbandry at the State University of New York (Canton). In 2004, he received the first ever honourary doctorate awarded by SUNY Canton in Animal Science. His interest in standardbreds started in college. “My closest friend in college, his dad trained and drove some horses in Saratoga. Actually, I always thought I would like to learn how to drive,” Peter said.

Instead, his decision to raise cattle became an all-consuming passion for the first half of his life. It explains why, when he turned to horses, Peter quickly moved from strictly owning standardbreds to breeding them, as well.

To that end, Heffering has bred a number of elite standardbreds, including 2001 U.S. Horse of the Year Bunny Lake, a winner of over $3 million and $1.3 million-winner Precious Delight.

Proving that in just 20 years in the horse business, Heffering had used his savvy skills and innate talent in the field of animal husbandry to turn much into gold.

The Canadian Horse Racing Hall of Fame was saddened to hear of Mr. Heffering’s passing on March 3, 2012 at the age of 80. 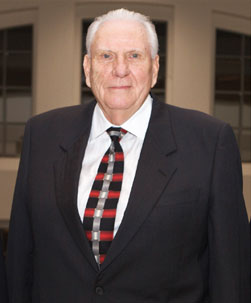