The saga of Victory Gallop began in 1995 when he was foaled at a small farm near the village of Loretto, ON, in Simcoe County. The bay son of Cryotoclearance and Vice Regent’s stakes-winning daughter Victorious Lil, was an extremely late foal, arriving on May 30. (Northern Dancer was a late foal as well, May 27.)

Fifteen years later, the Canadian-bred bay colt’s incredible journey from his place of birth to Hall of Fame status would include a trip to the yearling sales in Kentucky; a Triple Crown tour of Louisville, Baltimore and New York, where he stuck his nose out at the wire to win one of the most dramatic Belmont Stakes ever, crushing Real Quiet’s attempt to capture the elusive Triple Crown trophy; the Breeders’ Cup at Churchill Downs; Dubai’s Nad Al Sheba for the World Cup and finally to California to accept an Eclipse Award in 1999 as the Champion Older Male Horse in North America. Then a successful stud career at WinStar Farm in Versailles, KY; a trip to Chile in 2007 for the Southern Hemisphere breeding season, and finally off to Turkey in 2008 to stand at stud along with Kentucky Derby winners Sea Hero and Strike the Gold.

Unfortunately, his itinerary never included a visit to the home of his birth. Victory Gallop was bred by Toronto’s Ivan Dalos of Tall Oaks Farm, but was foaled and raised at Joanne Clayton’s Darrowby Farms. Dalos recalled that the horse was “Very handsome and very active.” Joanne and the female workers at the farm where he was boarded nicknamed him “Cruise”, after actor Tom Cruise.

After his victory in the Belmont, when he rallied from last place to nail a tiring Real Quiet at the wire, Clayton was ecstatic that Victory Gallop had been prepped at her farm. “This is a great boost for breeding in Ontario. There you go folks, we can raise a champion racehorse on Ontario grass, with Ontario water and Ontario feed. All I’ve been hearing for the last three years is that it has to be done in Kentucky. We’ve proved that’s not so.”

The colt was purchased at the Kentucky yearling sales by Dr. E.C. (Pug) Hart and his wife Susan of Ocala, FL. The Harts went to the September sales in part because they had raised Victory Gallop’s dam, Victorious Lil. A Kentucky agent later told Dalos that Victorious Lil’s colt had died. “It was terribly depressing for everybody. But it wasn’t true,” said Dalos. “I phoned Prestonwood Farms and was told that he was in training. And that the ‘dead horse’ had won a race.'”

The Preston brothers, oilmen Jack, Art and J.R., of Houston, TX, bought the colt from the Harts after his two-year-old season. They had been tipped that Victory Gallop had won three races, two minor stakes races at Colonial Downs, and had finished second in the important Laurel Futurity.

Trained by Elliott Walden, Victory Gallop barged into focus for the Triple Crown races when he won the Rebel Stakes and the Arkansas Derby at Oaklawn Park. At Louisville, he rallied from 15th and last place to finish a half-length behind Real Quiet. He had a similar trip in the Preakness, again rallying late but finishing second as the betting favourite. In the Belmont, Victory Gallop was “nowhere” until he went into one of his famed stretch drives to nail Real Quiet by inches at the wire in the closest finish in Triple Crown history. He became the first Canadian-bred to win this U.S. classic.

His season concluded with second-place finishes in the Haskell Invitational and the Travers Stakes at Saratoga before a one-length, four-horse photo finish loss in the Breeders’ Cup at Louisville. At Dubai in March, 1999, he finished third. Back home, Victory Gallop set a track record in winning the Stephen Foster Handicap at Churchill Downs and the Grade 1 Whitney Stakes at Saratoga over Behrens. The wins earned him an Eclipse Award. He won nine of 17 starts ($3.5 million (U.S.)) and was off the board only twice.

At stud, Victory Gallop was an immediate success. He was ranked second among freshman sires of 2003 and led the second-crop list in 2004. He had 24 stakes winners from six crops of racing age with earnings of $21 million. 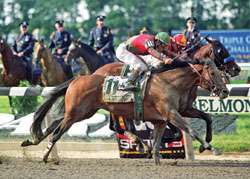