Mel Lawson’s legacy in the annals of Canadian horse racing is that of a humble, unassuming gentleman who for almost 50 years was recognized by his peers for his character, loyalty and passion for the sport. It would be a fair statement that he would have preferred to see his favourite thoroughbred, Eternal Search, receive this honour before his own induction into the Hall of Fame. Those who have been associated with Lawson since the day he entered racing in the 1960s as an owner, breeder and proprietor of a modest operation — Jim Dandy Stable — would heartily agree.

Mel Lawson might argue that Eternal Search, a three-time Sovereign Award winning mare of 15 stakes races, was more worthy than his contributions to the sport. His peers likely would disagree. Two owners he raced against were quoted as saying, “Mel was unfailingly supportive and helpful to us. His record as a breeder and owner, however, totally qualify him as a member.” Another owner wrote, “Mel Lawson became a mentor. He was helpful and kind, sharing his knowledge, quietly guiding us from many of the mistakes we would otherwise have made and always making himself available to discuss the triumphs and disasters our sport provides.”

Lawson was born in Hamilton, ON in 1923, and was a multi-talented athlete. He played junior hockey for the Toronto Marlboros, but gained fame as the youngest quarterback to win a Grey Cup championship when he led the Hamilton Wildcats to victory over the Winnipeg Blue Bombers in 1943. Mel, then 20, scored the winning touchdown. After graduation in forestry from the University of Toronto he followed his father into the lumber business.

In 1964, Mel bought his first racehorse and two years later won his first stakes race, the Manitoba Derby with Carodana. Mel and his trainer, Ted Mann, would win such races as the Canadian Derby and the B.C. Derby along with many of the classics at Woodbine – the Canadian Oaks, Coronation Futurity, Cup and Saucer, Princess Elizabeth and Dominion Day Stakes. His horses have won 46 stakes races, an impressive stat considering his home breeding operation produces two to three race horses per season. The names of Lawson’s horses are recognized local heroes and champions: Ruthie’s Run, Pottahawk, Let’s Go Blue, Ginger Gold, Jiggs Coz, Utterly Cool, Kesagami, Ghost Fleet, Smokey Fire, and of course, Eternal Search, who was Canada’s second highest female money winner (next to Glorious Song) when she retired. The familiar red and black silks (the team colours of his Hamilton high school) were prominent in the 1984 Queen’s Plate when Mel’s Let’s Go Blue and Key to the Moon, battled fiercely in the stretch. Both jockeys claimed foul. The stewards that day felt Mel’s horse had been impeded by the Plate winner, but they were uncertain, relative to the finish line, where the infraction had occurred.

Mel was naturally upset, as were his trainer, Janet Bedford, and jockey Larry Attard. The result stood. Mel’s camp thought that an appeal might result in the decision being overturned. Mel, always the respected gentleman, advised that there would be no appeal as based on a lifetime in sports, he had learned to accept the decision of the referee as final.

Mel Lawson passed away in the summer of 2011. 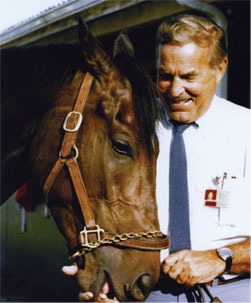