Alywow was the first foal of the brilliant stakes performer Triple Wow. On Sovereign Awards night in 1994, that’s what the daughter of champion Alysheba provided for Kinghaven Farms a triple wow.

The three-year-old filly trained by Roger Attfield swept the board as she was voted Canada’s Horse of the Year, champion grass horse and champion three-year-old filly. Alywow’s selection as grass horse of the year was a foregone conclusion after her narrow defeat against some of the world’s leading turf stars in the Gr. 1 Rothman’s International when she was beaten a length by Raintrap.

Bred and owned by David S. Willmot’s Kinghaven Farms, the bay filly broke her maiden in her third start before an allowance victory and the race that suggested her best efforts would come on the grass when she captured the Natalma Stakes. In her next start, over a sloppy track in the Princess Elizabeth Stakes, she finished second to 1993 champion two-year old Term Limits.

Alywow started her impressive 1994 season with a victory at Pimlico in the Lady Dean Stakes. Her next three starts were losses on the dirt, but she showed her turf ability at Saratoga on a yielding surface, winning the Gr. 3 Nijana Stakes. She made history in her next start, winning the first race over the new E.P. Taylor Turf Course as the odds-on favourite in the Canadian Breeders’ Cup Handicap.

Alywow traveled to Belmont for the Gr. 1 Flower Bowl Handicap and finished second before returning to Toronto as the lone filly in the Rothmans. It took a supreme effort by Raintrap to outstay her in the final strides for his win.

Her uncharacteristic four-length defeat in the Gr. 1 Matriarch Stakes at Hollywood was likely the result of developing a hairline fracture in her hind leg. Following off-season surgery, she returned at age four. After two second-place finishes and a disappointing effort in the 1995 Rothmans, she concluded her career in grand fashion, winning the Canadian Maturity on the grass at Woodbine.

In her 19 starts, she won seven times with six second-place finishes and three thirds for earnings of $648,431. As a broodmare, Alywow produced Century City, a colt by Danzig who was a multiple stakes winner in Ireland and California, as well as stakes winner Hidden Cat, a filly by Storm Cat. 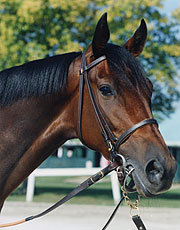