Championship form is difficult to maintain over the course of one season. La Voyageuse, owned and bred by the late Jean-Louis Levesque, managed this feat for three consecutive years, from 1978 to 1980, winning Sovereign Awards in each of those seasons under the direction of trainer Yonnie Starr.

Her breeding surely determined her ability to achieve these awards as she was a product of the mating of Tentam and the superb race mare Fanfreluche, which made her a half-sister to stakes winners L’Enjoleur, Medialle D’Or and Grand Luxe.

The dark bay filly was an “underdog” early in her career, mainly because of her star stablemate L’Alezane, the two-year-old filly champion and Horse of the Year in 1977. The tide turned in the 1978 Canadian Oaks when she sprung a huge upset, outstaying L’Alezane to capture her first stakes race. She also won the Bison City Stakes and earned champion three-year-old filly honours.

At age four, La Voyageuse was a consistent, versatile force within the filly and mare division, winning both on the grass and dirt and from six to nine furlongs. In most of her races, she was top weighted. She captured the Ontario Matron, Ontario Fashion, Hendrie Handicap and the Miss Tropical in Florida along with runner-up finishes in the Belle Mahone, Whimsical, Seaway and Canadian Stakes to earn older filly and mare honours.

The La Voyageuse express remained a force at age five, enduring a long campaign in which she carried top weight in each start, winning 11 of 13 races. Seven of her wins came in stakes races, one of them was the Ontario Matron where she spotted her runner-up 10 pounds while toting 129. A wire-to-wire score over the boys in the Nearctic Stakes sealed her place in history as Canada’s inaugural winner of the Sovereign as champion sprinter. She retired with 26 wins, 10 seconds and seven third-place finishes from 56 starts.

As a broodmare La Voyageuse produced seven winners, including two-time Gr. 3 stakes winners Time Bandit and Innovative, a winner of 16 races. The female side of La Voyageuse’s pedigree is dotted with Hall of Fame influences. Of the seven names in the first three generations, six are Hall of Fame inductees – including her dam Fanfreluche, her grand-dam Ciboulette and her broodmare sire Northern Dancer. 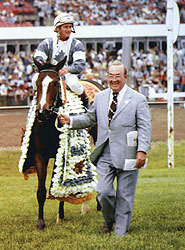