When you seek horses with meteoric careers, Peteski has to be among those at the top of any list. Here was a horse which began the 1993 campaign with earnings of just $714 from his only start as a juvenile. Less than a year later he was Canada’s Horse of the Year following his sweep of the Triple Crown series in devastating fashion, winning the Queen’s Plate, Prince of Wales and Breeders Stakes by a combined 16 lengths. He led three rivals every step of the way in winning the Breeders by six lengths at Woodbine despite a saddle that slipped out of place early in the 1 1/2 mile race. The triumph followed a track record performance of 1:54.2 in the 1 3/16 mile Prince of Wales at Fort Erie.

His brilliant three-year-old campaign for trainer Roger Attfield saw Peteski defeat the winners of two U.S. classics when he captured the Molson Export Million Stakes over Kentucky Derby winner Sea Hero and Belmont Stakes winner Colonial Affair. Also in the Molson field was Kissin Kris, winner of the Gr. 1 Haskell Invitational. He was supplemented for $15,000 to allow him to start in the Molson Export. His final race was the Gr. 1 Super Derby at Louisiana Downs, which he lost by a neck in a five-horse photo finish. A wretched ankle knocked him out of the Gr. 1 Breeders’ Cup Classic on the morning of the race at Gulfstream, an injury that ended his meteoric career.

Peteski was owned by Earle I. Mack, a resident of Manhattan, a member of the board of trustees of the New York Racing Association and formerly the U.S. ambassador to Finland. A son of Triple Crown winner Affirmed and out of the Nureyev mare Vive, Peteski was bred by Barry Schwartz of Montreal and was acquired by Mack for $150,000 (U.S.) after the colt broke his maiden at Woodbine. After two allowance wins and a second-place finish in the Plate Trial Stakes, Peteski dominated racing locally for Mack, who became the first U.S. resident to win the Plate. In 11 starts, he won seven and was out of the money only once while earning over $1.2 million.

At stud Peteski sired Pete’s Sake, who won the stakes race his sire failed in at Woodbine, the Plate Trial, and graded stakes winners Royal Spy and Nani Rose. Peteski stood at stud at Darby Dan Farm in Lexington and Pin Oak Lane Farm in Pennsylvania, but died prematurely at age 11 in 2001, the same year that his famed sire Affirmed also died. Subsequently Peteski joined many of horse racing’s greatest thoroughbred and standardbred champions, Man o’War, Forego, John Henry, Cam Fella and Bret Hanover, when he was laid to rest in the burial grounds of the Kentucky Horse Park in Lexington. 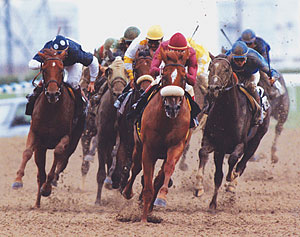