Rich N Elegant is considered by many to be the greatest standardbred broodmare in history. With total progeny earnings of nearly $8.5 million, average earnings per starter of over $935,000 and two Pepsi North America Cup-winning sons to her credit, it’s hard to argue.

Of her six sons, four have competed in Canada’s richest harness race, and if not for Rustler Hanover suffering broken equipment in the 1998 edition, three might have been crowned champion.

Bred and raised by the famed Armstrong Brothers operation in Inglewood, ON, Rich N Elegant is out of the Abercrombie mare Proven Perfect.

Rich N Elegant sold as Armbro Literal when Ontario owner Vincent Li paid $20,000 (U.S.) for her as a yearling. However, unlike her offspring, she was no record-setter. She turned into a modest stakes competitor for trainer John Kopas at two, and again early at three for Bill Robinson. At the end of her sophomore campaign, Rich N Elegant had won five races, registered a mark of 1:56.4 and had tallied earnings of $96,244. Soon thereafter, agent Bob Boni brokered a deal, and Rich N Elegant would become the property of Hanover Shoe Farms. It was the best $12,000 the Hanover, PA operation would ever spend.

“She obviously doesn’t realize she cost only $12,000 (U.S.) and we’d be crazy if we expected near what she’s done, said Hanover’s Murray Brown. “She’s just been remarkable”

Then, in 2002, came Rocknroll Hanover. Like his older half-brother, Red Hanover Hanover, Rocknroll Hanover was owned by Lothlorien Equestrian Centre of Cheltenham, ON and Jeff Snyder of New York City. Not only did Rocknroll Hanover win the 2005 Pepsi North America Cup at Woodbine, less than a year after he won the $1 million Metro Pace at Woodbine, he rolled on to an outstanding sophomore campaign that earned him the U.S. horse of the year award. Rocknroll Hanover finished his career earnings exceeding $3 million.

Rich N Elegant’s more recent foals have proven to be less successful, to date, but Hanover’s farm manager Dr. Bridgette Jablonsky, is convinced she has excelled as a broodmare because she has exceptional mothering instincts.

“(Jablonsky) feels very, very strongly that the mother’s influence contributes to the foal being a good horse,” Brown said. “She thinks so especially with Rich N Elegant. She thinks traditionally she’s taught her foals manners. She keeps them near her. She doesn’t let them get into trouble. She kind of herds them and is very protective of them. They’re very smart.”

Rich N Elegant was humanely euthanized at the age of 22 on November 16, 2012 following a severe bout of colic, and was buried at the Hanover Shoe Farms equine cemetary which is the final resting place for the many great stallions and mares that have called Hanover Shoe Farms their home.

The announcement of the great mare’s passing was published by Standardbred Canada https://standardbredcanada.ca/notices/11-19-12/rich-n-elegant-passes.html 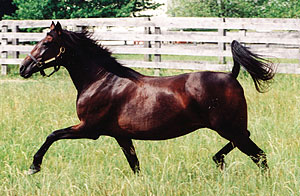