Keith Clark ranks among — if not at the top of the list — of the greatest horsemen Alberta has ever produced.

In 40 years in the business, the 56-year-old trainer/driver who lives in De Winton, AB has recorded 5,650 driving victories and has personally steered his mounts to over $28 million in purse earnings.

At the time of induction, n the training front, Clark’s horses had recorded 3,329 wins and earned more than $20 million in purses. Five times he had trained the winners of more than $1 million in a season.

A 14-time winner of Alberta’s Horsemen of the Year award, Clark was honoured with the O’Brien Award of Horsemanship in 2004.

Clark’s most memorable horse was the Abercrombie pacing colt As Promised, a winner of 71 races and over $669,000.  As Promised was inducted into the Canadian Horse Racing Hall of Fame in 2006.

Apart from As Promised, Clark’s name is indelibly tied to great horses such as Thatll Be Me, Clintons Cigar, Sippin Time, Just Doodlin, Rons Girl and Ma Belle Hall.

Thatll Be Me earned over $750,000 with 42 wins in 126 starts, including the 1995 Breeders Crown for older pacers contested at Northfield Park in Ohio.

Rons Girl, a daughter of As Promised, earned $576,458 and won 29 of 52 starts, posting a 1:49.3 mark at Mohawk Racetrack in Campbellville, ON. She won the Breeders Crown for pacing mares in 2000 at the Meadowlands in New Jersey and the Northlands Filly Pace in 1999 at Northlands Park in Edmonton.

Pacing mare Sippin Time collected $322,434 in 128 starts, making 37 trips to the winner’s circle, the pinnacle being a victory in the Northlands Filly Pace in 1996.

Ma Belle Hall garnered $316,569 from 19 wins in 41 starts, finishing second in the 2001 Nat Christie in Calgary and winning the Northlands Filly Pace in Edmonton.

“I have heard from many Hall of Fame trainers that Keith Clark would be a champion at any track at any time.”

Upon being told of his induction into the Canadian Horse Racing Hall of Fame, Clark credited loyal owners, good fortune and his brother, Bob, for managing his farm and driving some of the stable’s horses. 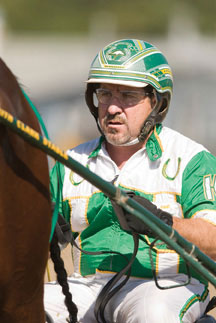