No stallion in the history of Thoroughbred racing in North America was ever credited with the amazing accomplishment that the progeny of Smart Strike managed on a September afternoon in 2007 at Belmont Park. It was racing’s version of hitting four homers or pitching a no-hitter in a baseball game. Three Gr. 1 races were contested that day, two on the dirt and one on the turf, and the winners of these elite events were all sons of the Canadian-bred sire owned and bred by Ernie Samuel’s Sam-Son Farms of Milton, Ont. Preakness Stakes winner Curlin won the Jockey Club Gold Cup at 11/4 miles, grass specialist English Channel captured the Joe Hirsch Turf Classic Invitational Stakes at 11/2 miles and speedster Fabulous Strike triumphed in the six-furlong Vosburgh Stakes.

Those achievements were a prelude of what would occur a month later at Monmouth Park, N.J., when Curlin won the $5 million Breeders’ Cup Classic and English Channel took the $3 million Breeders’ Cup Turf. By season’s end, the sons and daughters of Smart Strike (Mr. Prospector-Classy ‘n Smart) had earned a world record $14,358,570, which was almost $4 million better than the runner-up on the sires’ list, A.P. Indy, who also stood at William Farish’s Lane’s End Farm near Versailles, Ky. Curlin would go on to enhance Smart Strike’s reputation when he won the $7 million Dubai World Cup in March, 2008.

The magnificently-bred stallion, is a half-brother to Hall of Fame Triple Crown champion Dance Smartly. His dam and grand-dam, Classy ‘n Smart and No Class, are also members of Canada’s Hall of Fame. Since entering stud in 1997, Smart Strike has sired a lengthy list of Sovereign and Eclipse award champions and two Horses of the Year from his nine crops. Besides Curlin, whose earnings topped more than $8 million this spring, and English Channel ($5.3 million), the list of 50 black-type winners includes: Soaring Free, Eye of the Sphynx, Portcullis, Gold Strike, Added Edge, Tenpins, Shadow Cast, Strike a Deal, Strike Softly, Super Freaky, Pleasant Strike, Tungsten Strike, Fleetstreet Dancer and Fabulous Strike.

Trained by Mark Frostad, Smart Strike was unraced at age two, but won three of his four starts as a three-year-old in 1995 at Woodbine. The following year he won the Gr. 1 Philip Iselin Hdcp. and Gr. 3 Salvator Mile Hdcp. at Monmouth Park and an allowance race Woodbine before finishing fourth to Cigar in the Gr. 1 Woodward Stakes at Belmont. While training for the 1996 Breeders’ Cup at Woodbine, Smart Strike suffered a leg injury, and was retired. In eight starts (six wins and a second) he earned $337,376.

On March 25, 2014, at the age of 23, Smart Strike was humanely euthanized as a result of complications from laminitis.  At the time of his death, his stud career ranks were among the sport’s best on the track and in the sales ring. Retired from racing in 1997, he is credited with $118,652,193 million in progeny earnings to date. His offspring include two-time Horse of the Year and leading sire Curlin’ and other notable names such as English Channel, Lookin At Lucky, and My Miss Aurelia.

He is buried at Lane’s End Farm. 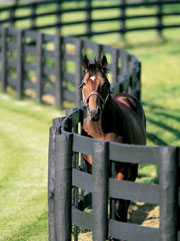