Peaceful Way was anything but quiet on the racetrack. The all-Canadian trotting mare, born, bred and raised in Ontario to longtime owner Angie Stiller of Stonebridge Farms in Arva, earned over $3.2 million in five racing seasons, won a record four O’Brien Awards as the best in Canada in her class and was victorious 33 times in 52 starts.

Plucked from the 2002 Forest City Yearling Sale in London, Ont. for $30,000 by trainer Dave Tingley of Guelph, Ont. and Joe Myers of Virginia, Peaceful Way, originally called Stonebridge Phebe, was renamed for the road on which Myers lives in the Peaceful Beach Estates.

“I came up from Virginia to look at her and I first thought, ‘Oh my God, she’s so small. Maybe I should rethink this purchase.’ But I didn’t. I made up my mind I was buying her and that was it,” Myers said.

Blessed with blazing speed, the daughter of Ontario-based stallion Angus Hall out of Royal Bait gained worldwide attention at two in 2003 when she dominated the Grand Circuit, winning nearly $1 million and Canada’s freshman trotting filly of the year award.

At three, Peaceful Way was nearly flawless, winning all five of her Ontario Sires Stakes events, including the $300,000 Super Final. Though she did break stride in both the Hambletonian Oaks and the Breeders Crown, she dominated the Delvin Miller Memorial at the Meadowlands Racetrack in New Jersey, obliterating the field by six lengths in a new lifetime best of 1:52.3. She ended her sophomore campaign with 11 wins and earnings of almost $700,000.

In 2005, she won all but one of her 10 four-year-old starts, including the Classic Oaks, the Armbro Flight, the Classic distaff, Breeders Crown and American-National against the male trotters in Chicago. The one start she failed to win was the Maple Leaf Trot against the boys at Mohawk Racetrack. She took home her third consecutive national divisional title at the O’Brien Awards, this time as her country’s unanimous choice.

The highlight of Peaceful Way’s career came in 2006 when she surpassed $3 million in lifetime earnings with a stirring triumph against the sport’s best older male trotters in the 55th edition of the Maple Leaf Trot.

“The Maple Leaf Trot definitely was her greatest win. It’s fantastic to have owned such a horse as her, who I regard, and Dave (Tingley) does, too, as probably the fastest trotting mare that ever lived,” Myers said.

That year, she also won the Armbro Flight, the Allerage and the Matchmaker stakes races en route to yet another O’Brien Award as Canada’s older trotting mare of the year.

Peaceful Way set her lifetime mark of 1:51.4 at age four at the Meadowlands and was twice honoured as the best trotting mare in her class in the United States.

Owned at the end of her racing career by Myers, Tingley, breeder Angie Stiller and the Toronto-based trio of breeders Al Libfeld, Marv Katz and Sam Goldband, Peaceful Way was retired in 2007 in a trackside presentation at Mohawk on Maple Leaf Trot night. The Woodbine Entertainment Group has renamed the Oakville Trot the “Peaceful Way Stakes” in her honour.

In 2021 Peaceful Way was named to the U.S. Harness Racing Living Horse Hall of Fame. 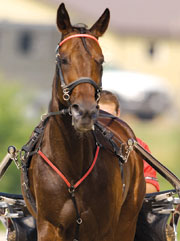