When Robert Tiller earned his third Sovereign Award during a four-year period for Outstanding Trainer in Canada in 2004, there was ample physical evidence to highlight the superiority he had achieved over a lengthy career which began in 1972. He was an instant success that year, winning 21 races during the first season.

In 1975, he had an initial brush with fame when his Near the High Sea, a rank outsider in the Queen’s Plate, finished second behind the prohibitive favourite and future inductee into Canada’s Hall of Fame, L’Enjoleur.

Initially, Tiller won the admiration of other horsepeople for his claiming acumen. Yet one of Tiller’s most noted skills to emerge over time has been searching out and acquiring inexpensive yearlings and turning them into significant achievers. Many of them he has fashioned into champions. His Sovereign Award champions include: Rare Friends, a multiple stakes winner and leading two-year-old colt in 2001, Simply Lovely, the top two-year-old filly of 2004 and Win City, Horse of the Year in 2001 and the champion three-year-old colt with victories in the Prince of Wales, Queenston, Marine, Plate Trial, Col. McLaughlin Stakes and Autumn Handicap.

Some of Tiller’s other significant stakes winners include: Near the High Sea, Domasca Dan, Elated Guy, Talk Back, Brass in Pocket,Winter Garden, Forever Grand, Twisted Wit, Cheap Talk, Top Ten List, Are You Serious, Spread The News, Midnight Shadow, Dancer’s Bajan and Dave The Knave, who was Tiller’s 100th career stakes winner. He has had 108 stakes victories since 1975, including 10 graded victories. Tiller is Woodbine’s winningest trainer since 2000, having recorded 471 victories (22.43 per cent win rate).

He annually achieves significant earnings, a strong winning percentage and an outstanding in-the-money average. For an extended time he has been a fan and media favourite. Born in Amsterdam, Holland, in 1949, Tiller has been a longtime resident of Brampton, Ont. 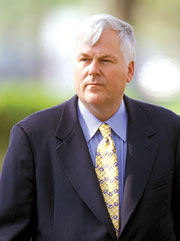