Stephen Edwards, the former President of the Canadian Horse Racing Hall of Fame once said, “Lou Cauz is the Hall of Fame.” It is particularly appropriate that Cauz is now inducted into the very Hall of Fame he was instrumental in building.

In 1973, seven years after he began covering thoroughbred racing for Toronto’s Globe & Mail, Cauz joined other members of the racing media and the publicity directors of Canadian racetracks in developing the nation’s Horse Racing Hall of Fame.

In 1976, the Hall of Fame came to life and by the early 1980s, Cauz was volunteering as chairman of both the Thoroughbred Nominating and Election Committees. In 1996, Cauz was chosen as the managing director of the Canadian Horse Racing Hall of Fame and put in charge of developing and locating the Hall in a space provided at Woodbine Racetrack.

A year later, the Canadian Horse Racing Hall of Fame opened to the public, but first Cauz had to restore and catalogue vital information, clippings, periodicals, videos and other artifacts.

Cauz, was instrumental in creating a Hall of Fame veterans category and he expanded the concept of the induction luncheon to a gala evening ceremony that now serves as both a celebration and a fundraiser.

He began his career in the newspaper business at the age of 17 when he joined the Hamilton Spectator as an office boy and proof reader. In 1957, he moved to Toronto and became a reporter for the Globe & Mail. He covered a number of sports, including thoroughbred racing, in his 17 years at the paper. In 1974, he left to serve as the director of information for John Mooney‘s Nashville Stud farm.

In 1979, Cauz began a two-year stint covering sports for the Toronto Star, leaving in 1981 to become a freelance journalist. That same year, he began work on his book “The Plate – A Royal Tradition” to coincide with the 125th running of the Queen’s Plate. Cauz updated the book in honour of the race’s 150th running in 2009.

In 1984, Cauz was the initial recipient of the Sovereign Award for feature writing. He has also received critical acclaim for his book “Baseball’s Back in Town” on the expansion Toronto Blue Jays. Cauz has long held the position as an Official Scorer for Major League Baseball.

In 2005, Cauz was inducted into the Etobicoke Sports Hall of Fame.

Prior to taking the title as managing director of the Canadian Horse Racing Hall of Fame and becoming the historian for the Woodbine Entertainment Group, Cauz worked part-time maintaining a library at Woodbine Racetrack.

In 2012, Louis Cauz retired from the role of Managing Director of the Canadian Horse Racing Hall of Fame, and now carries the title Director Emeritus. 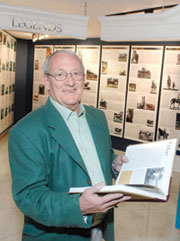