The late Cliff Chapman, Jr. wove a colourful path through the harness racing industry in his illustrious career. “Chappy” was the past owner and publisher of The Canadian Sportsman, one of the nation’s last legal bookmakers, a horse trainer, a bid spotter at hundreds of horse sales and a race secretary and paddock judge at numerous tracks.

“Chappy was a showman,” said his long time friend Brian Webster when Chappy died of a stroke in December of 2003 at the age of 83. “He could have been in vaudeville just as easily because he did that with his bookmaking and all parts of the auction business.”

Webster said Chappy’s most important role likely was as owner and publisher of The Canadian Sportsman from 1959 to 1976. Apart from keeping alive the oldest turf journal in North America, the magazine, which began publishing in 1870 and was the oldest magazine of any kind in Canada.

Before owning The Sportsman, Chappy made his living as Ontario’s last legal bookmaker prior to the dawn of pari-mutuel wagering. Chappy learned the “handbook” method of betting at Old Dufferin Race track in the late 1940s. People who witnessed Chappy’s operation have said he had a mind faster than a calculator and he used to calculate odds and produce betting slips faster than a SAM machine.

“He’d stand there with a handful of $10, $20 bills. He’d be trying to talk people into betting on this particular horse, or not betting on that one,” Webster said. “It was quite a show. This guy was standing up there like a circus barker in front of a midway tent. It was the only place people could bet on horses, so it was pretty entertaining.”

Just as entertaining was Chappy’s enthusiastic bid-spotting routine, which he kept up into his 80s, until retiring just a few years before his death. Chappy’s fans were known to flock to his section at auctions so he could take their bids.

Chappy was the first racing secretary at Western Fair Raceway in London, ON when it opened in 1961. He also served as the race secretary on the Great Western Race Circuit in Manitoba, was the director of racing at Sun Parlour Raceway in Leamington, ON and was the paddock judge at Florida’s Pompano Park.

He was a director of the Canadian Trotting Association from 1972 through 1975 and received the CTA’s general achievement award in 1982. In 1988, he received a similar award from the Ontario Breeders and Owners Association.

A gifted story teller, Chappy often worked his magic on a room.

“Chappy could tell you stories for hours and hours and there was no pretentiousness to him,” Webster said. “He was a man of character. He had the same time for grooms or for the wealthiest people in the business. He had stories about them all.” 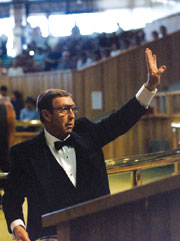