In 1961, Pierre Levesque, a successful entrepreneur who operated a family-owned mill, construction materials business and several farms in Quebec’s Eastern Townships, decided to buy a couple of standardbreds to race.

In 1965, he purchased Manitoba breeder Leon Sauteur’s entire stable, including stallion Champ Adios and numerous broodmares which would be the foundation of Angus Farm (named for the Aberdeen Angus cattle raised there before the horses). Angus Farm would grow into one of Quebec’s largest breeding operations, at one time home to five stallions and almost 100 mares.

The stallion that put Angus Farm on the map was Bye Bye Pat, who stood for 15 years at Levesque’s farm, siring more than 700 fillies and colts. An amazing 70 percent made it to the races and earned in excess of $13 million in purses.

Many successful horses and champions have been bred at Angus Farms, but perhaps none more famous than trotting broodmare Amour Angus, sired by Magna Force from a Texas mare called Kenwood Scamper that Levesque bought for about $20,000(U.S.)

Amour Angus was a stakes-calibre horse in Quebec in the late 1980s, but an injury shortened her career at three and she earned only $21,000.

Amour Angus had produced Emilie Cas El, plus a second foal and was carrying Angus Hall when Levesque was approached in 1995 by Walnut Hall Farm in Kentucky to buy the mare.

“You could see already what the casinos were going to do to our industry (in Quebec),” said Levesque, who sold Amour Angus carrying Angus Hall, with the weanling Internet Angus (subsequently renamed Conway Hall) at her side, for $50,000 (U.S.).

“I told my accountant at the time we were selling the best broodmare in Canada,” Levesque told the Montreal Gazette’s Paul Delean in the spring of 2008. “But what can you do? I didn’t want to have to borrow money to pay my bills. You do what you have to do when times are tough.”

In July of this year, Amour Angus was inducted into the United States Harness Racing Hall of Fame in Goshen, NY. Her total progeny earnings exceeds $3.5 million.

Angus Hall has sired the winners of over $36 million, including 2008 Hall of Fame inductee Peaceful Way (over $3.2 million) and stallion Majestic Son, who earned over $1.9 million and was named Canada’s Horse of the Year in 2006.

Andover Hall has sired the winners of more than $14 million, including two-time O’Brien Award winning mare Pampered Princess (over $1.7 million) and 2007 U.S. Horse of the Year Donato Hanover (over $3 million). 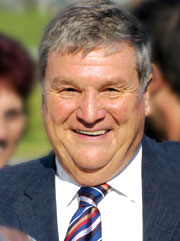