Canadian Champ was bred by E. P. Taylor and was in the consignment of the first sale of yearlings in 1954 at Taylor’s National Stud in Oshawa. Five years later Canadian Champ returned to the farm where he had been foaled, now called Windfields Farm, as a champion and a heralded stallion prospect. However, he never raced under Taylor’s turquoise and gold silks. Instead the silks were flamingo with a black sash, the property of Bill Beasley, who had made a fortune in bingo games, children’s rides at carnivals and amusement parks. Beasley paid $7,500 for the colt and had high hopes for the bay son of Windfields-Bolesteo. The first thought that came to his mind when he looked him over was that he had “bought a champ.”

“He was the ‘people’s horse’,” recalled Bill’s son Warren. “I remember the afternoon at the CNE when my dad was calling out the bingo numbers. In the middle of the game he got a call from the track saying that Canadian Champ had won a big stakes race. All the bingo players stood up, clapping and cheering. The people loved this horse.” Stable hands called him “George” and later “King George” when he conquered every two-year-old in Canada. He earned Horse of the Year honours in 1956 when he won the Plate Trial, the first running of the Queen’s Plate at the newly opened Woodbine, as well as the Prince of Wales and Breeders’ Stakes. During his career he won 20 races in Canada, 15 of them in stakes competition. Speed was Canadian Champ’s style as he would break sharply from the gate and defy the opposition to catch him.

He was Canada’s champion two-year-old, winning the Coronation Futurity, Cup and Saucer, Golden Spoon and Diamond Ring Stakes. At Saratoga, N.Y., he raced against the leading U.S. juveniles, finishing second in the Troy and United States Hotel Stakes. He won seven stakes races at age three, setting two track records and equaling two. In 1957, he won the Horometer Stakes in track record time and set a course record on the turf at Hialeah while dead heating with Tudor Era.When he retired at age five he was Canada’s leading money winner and was either first, second or third in 34 of his 42 starts.

The colt was ridden by Dave Stevenson for much of his career and trained by future Hall of Famer John Passero. Beasley’s $7,500 investment in 1954 for “George” reaped a return of $152,000 in purses before he sold him back to Taylor for about $150,000. Taylor was pleased with his transactions with Beasley. He had sold a Plate winner and champion from the first crop of yearlings he had offered to the public. And on Canadian Champ’s return to Windfields he was an immediate success, siring Canebora, who would win the Triple Crown, and another champion and Queen’s Plate winner, Titled Hero. Some of Canadian Champ’s other stakes winners were Canadillis, winner of the Prince of Wales, and Des Erables, who won the Grey Stakes, Pryority and Baranof. 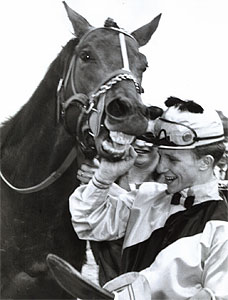