Trainer Yonnie Starr and jockey Jim Fitzsimmons always did have a way with fillies. Conn Smythe’s Jammed Lovely would be no exception for these two veterans when she startled the bettors with her upset victory over co-favourite Pine Point in the 1967 Queen’s Plate. Fitzsimmons won two Plates, both on fillies, Flaming Page and Jammed Lovely, while Starr’s stable of champion fillies included Fanfreluche, La Prevoyante, Wonder Where, Kitty Girl and Ciboulette. Jammed Lovely was the only filly in the 14-horse Plate field. She defied the handicappers, winning by a neck and posting a mutuel payoff of $24.90 for the $2 punters. It took a masterful ride by Fitzsimmons, who’d kept Jammed Lovely close to the pace.

However, coming into the stretch she was fourth on the rail and boxed in. But a quick manoeuvre by Fitzsimmons, as he swung around Ette Rule then cut back to the rail, enabled Jammed Lovely to grab the lead and hold off Pine Point’s desperate challenge. In 1966, the filly began her juvenile career. She was a daughter of Jamie K. and Eolia, two horses that had been the keys to Smythe’s breeding successes. Successful on the dirt, she absolutely dazzled on the turf, winning the prestigious Natalma Stakes by 11 lengths, and the Mazarine on the dirt by a similar margin.With her five wins and a second-place finish in the Princess Elizabeth she was Canada’s champion two-year-old filly.When the 1967 season began Smythe knew he had an exceptional filly.

After a fourth-place finish in the Selene she went into the Canadian Oaks, but couldn’t cope with the sloppy racing strip and finished second. A week later Smythe surprised the media by entering her in the Plate against 13 males. Her win enabled the filly to join Flaming Page, and later La Lorgnette, Dance Smartly and Dancethruthedawn, as the only fillies to win the Plate at Woodbine since 1956. Jammed Lovely was third in the Prince of Wales Stakes and had second-place finishes in the Canadian Hdcp., and the International Hdcp., and finished her career with eight wins, six seconds and four thirds in 23 starts.

As it turned out, 1967 was a big year for Smythe as his Maple Leafs won the Stanley Cup and a filly his wife, Irene named won the Plate. During a stroll through the paddocks of his Caledon farm with Irene, the foal suddenly jumped up and nestled against her mother, the way foals do. Irene said, “Isn’t she lovely.” “I looked at Irene and thought it could be applied either to my wife or the filly and thought wouldn’t that be a good name – Jammed Lovely.” As a broodmare she produced a marvelous multiple stakes-winning champion Lovely Sunrise and stakes-placed Jammed Bear.

As a lasting tribute to the filly, every November Woodbine hosts the Jammed Lovely Stakes for Canada’s top three-year-old fillies. 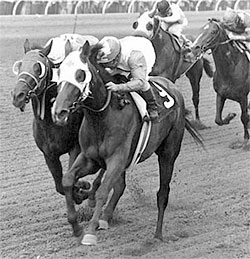