If ever there was a horse bred to be a champion it was L’Enjoleur, the bay colt who in 1974 and 1975 became the first repeat winner of Canada’s Horse of the Year honours in the award’s 25-year history. He was by U.S. Hall of Fame great Buckpasser and was out of Canadian Horse of the Year champion Fanfreluche. L’Enjoleur’s grandpa and great-grandpa on the maternal side were also champions – Northern Dancer and Nearctic.

L’Enjoleur certainly overcame the pressure to live up to these impeccable breeding connections. At age two he won the major races for two-year-olds in Canada – the Coronation Futurity, Cup and Saucer Stakes (setting a new course record) and Summer Stakes as well as the Winnipeg Futurity, Clarendon and the Ontario Foaled Stakes. Owned and bred by J. Louis Levesque, who sold a half-interest in him to Roy Kennedy in 1974, L’Enjoleur climaxed his juvenile season for Hall of Fame trainer Yonnie Starr when he went to Baltimore and equaled Pimlico’s track record by winning the Laurel Futurity over Wajima, who would reign as America’s leading three-year-old the following season.

His three-year-old campaign got off to a slow start. He was the winter-book favourite for the Queen’s Plate and second choice for the Kentucky Derby. But that winter in Florida and Louisiana he had several nagging ailments and colic. In seven starts prior to the Plate he had one win — the Quebec Derby. However, with Sandy Hawley up, L’Enjoleur toyed with the field, coming within 3/5ths of a second of the Plate record. He then won the Prince of Wales, Manitoba Derby, Carling O’Keefe Invitational, McLaughlin and Harry Jeffrey Handicaps. His attempt to win the Triple Crown failed when he finished third, beaten three lengths, on the grass in the Breeders’ Stakes. His career earnings were $546,000, winning 15 of 30 starts.

L’Enjoleur’s career as a stallion was also remarkable. He went to stud in 1976 at Kennedy’s Gateway Farm in Florida and was North America’s leading freshman sire in 1979. Among the more than 33 stakes winners were Canadian champions Avowal and Par Excellance, who were each multiple Sovereign Award winners. Another standout was millionaire Scott’s Scoundrel. L’Enjoleur had seven group/graded stakes winners and his progeny earned more than $22 million.

His daughters were notable broodmares, producing millionaires Grand Canyon, who won the Gr. 1 Norfolk and Hollywood Futurity and was second in the Breeders’ Cup Juvenile; Down the Aisle, winner of the Gr. 1 United Nations Handicap, and Canadian champion filly One From Heaven, winner of the Gr. 1 Selene Stakes. L’Enjoleur went to Ohio in 1993 and led that state’s sire list five times. A pensioner in 2000, L’Enjoleur died at age 28 at Highland Meadows Farm near Petersburg, Ohio. 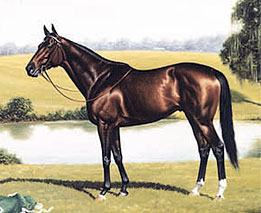