One wonders what course the history of thoroughbred racing would have taken in the 20th century if E.P. Taylor and his Windfields Farm staff had not decided in 1960 to breed its young stallion, Nearctic, to a royally-bred three-year-old filly – Natalma.

She was by one of the all-time greats in racing and as a sire, “The Grey Ghost of Sagamore”, Native Dancer, and was out of Almahmoud, the stakes-winning daughter of English Derby winner Mahmoud. With the earnings of Nearctic, Taylor had acquired her at the Saratoga, N.Y. yearling sales for $35,000. It was mid-June, terribly late in the season to be considering breeding the recently retired filly. It meant that if she caught on the first cover, the foal wouldn’t be born until late in May. Breed now or wait until next spring? She was bred to the swift, volatile son of Nearco. It was Nearctic’s last cover of the season, and Natalma caught.

On May 27, 1961, the history of thoroughbred breeding and racing throughout the world changed forever when Natalma gave birth to Northern Dancer. One need not to glorify the rarified status Natalma achieved when Northern Dancer went on to win the Kentucky Derby and establish himself as the preeminent sire of the 20th century. Think of his sons – Danzig, Storm Bird, Viceregal, Lyphard, Sadler’s Wells, Vice Regent, Nureyev and Nijinsky. Each is traced back to the Dancer’s mom, Natalma.

On the track Natalma won three of seven starts and was twice third during her brief racing career at ages two and three. She won her first two starts at Belmont, N.Y., but was disqualified after winning the Spinaway Stakes at Saratoga, N.Y. Coming out of the backstretch jockey Bobby Ussery cracked her with his whip and Natalma ducked to the inside, causing her to interfere with another filly. As a three-year-old she started twice. In her first start, 9 April 1960, at Keeneland, Ky., she showed speed, going to the lead for a half mile before she suddenly backed up and finished tenth. Two weeks later she surprisingly was the favorite and won easily with Bill Hartack in the irons. It was the final race of her career. Knee problems curtailed her career before she was reluctantly retired to join Windfields’ imposing band of broodmares.

To be succinct, Natalma’s contributions to both Canada and the breeding of thoroughbreds throughout the world have been most influential. In the 133rd running of the Kentucky Derby, champion Street Sense’s pedigree revealed that he was inbred to Natalma through her daughter Raise and Standard and son Northern Dancer. Inbreeding to Natalma has proved to be a potent pedigree pattern. 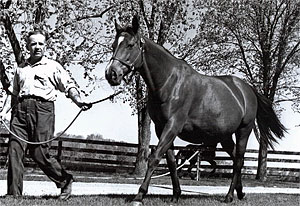