A $65,000 purchase for John Grant at the 1999 Harrisburg Sale, the son of Cams Card Shark-Classic Wish was a slow starter in his two-year-old season, but by late October he peaked with victories in the rich Breeders Crown and Governors Cup. His victory in an elimination of the Breeders Crown set a track record mile of 1:51.3, which he followed up with a 1:52.4 clocking in the $871,475 final. Bettor’s Delight ended his rookie season with six wins and just over $804,000 in earnings en route to winning a Dan Patch Award as the Two-Year-Old Pacing Colt of the Year in the United States and an O’Brien Award as Canada’s Two Year Old Pacing Colt of the Year.

Under the guidance of trainer Scott McEneny, Bettor’s Delight blossomed during his sophomore season, winning nine of 16 and over $1.7 million. After guiding him to a Breeders Crown win in his freshman season, driver Mike Lachance earned the mount as the colt’s regular driver for his three-year-old year and the pair made a dynamic team, scoring numerous stakes victories.

His sophomore season, which included wins in the N. A. Cup and Little Brown Jug, was rewarded with two O’Brien Awards as Canada’s Three-Year-Old Pacing Colt of the Year and as Canada’s Horse of the Year. His career statistics included 15 wins and $2.5 million in earnings.

Blue Chip Farms added Bettor’s Delight to their stallion roster following his sophomore season. Since being retired, he has enjoyed full books of mares in each of the past two seasons. From 244 starters, he has sired winners of $14.9 million and 31 $100,000+ winners including multiple stakes champion, Darlins Delight, who kept the O’Brien Award title in the family as Canada’s Three-Year-Old Pacing Filly of the Year in 2006. 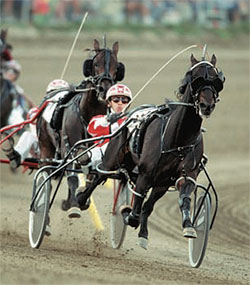