R.J. (Russ) Bennett and his wife Lois have been involved in Thoroughbred racing since the 1950s and are the most successful breeders in the history of racing in British Columbia. Together they have dominated the leading breeders’ list in the province since 1982, only missing on three occasions – 1986, 1999 and 2005.

If there is one horse that the Bennetts could point to with great admiration it would be Travelling Victor. The colt they bred made history in 1983 when he became the first horse not raced in Ontario to win Horse of the Year honours in Canada as well as a Sovereign Award for the Older Horse category. In 1983, the Bennetts also won a Sovereign Award as Breeder of the Year.

Their first was Flying Magic, hero of the British Columbia Premiers Championship. They were breeders of British Columbia’s first $100,000 yearling, a mark set in 1981 when On Air, a half-brother to Hall of Fame inductee Frost King,          was sold at the B.C. yearling sale. Mrs. Bennett    had acquired Frost King’s dam, Native Flower, for a modest amount at a Kentucky breeding sale.

A list of their successful runners, besides Travelling Victor, includes Brandy Magic, Skovinsky, Historical Devil, Tasty Victory, Superbly Honest, Darcea, Travelling Round, Easy Triumph, Hurried Romance, Billy Blue, Lively Lord and multiple stakes winners Lord Nelson and Always a Dixie. At one time the Bennetts stood stallions Dixieland Brass and Maudlin at Flying Horse Farm. In addition, the Bennetts own over 40 broodmares and maintain a population of more than 100 thoroughbreds year-round. Russ Bennett was president of the CTHS (B.C. division) for four years – 1991 to 1994. 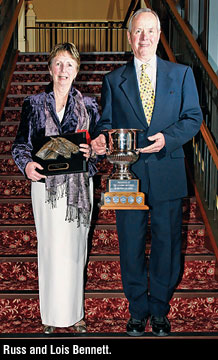