Lauries Dancer was Canada’s Horse of the Year in 1971 following a brilliant season in which she twice defeated the outstanding fillies competing on New York and Delaware racetracks. The bay filly was the unanimous choice as champion 3-year-old filly and garnered 18 of 22 votes in the Daily Racing Form’s annual poll for Horse of the Year. Her stablemate, Queen’s Plate winner Kennedy Road, received three votes.

The daughter of Northern Dancer-Its Ann, who had earlier won the Canadian Oaks at Woodbine, shipped to Saratoga, N. Y., in August for the Gr.1 Alabama Stakes and upset a field that included Eclipse Award winner Forward Gal along with stakes winners Alma North, Our Cheri Amour and Blessing Angelica. A month later in the Gr.3 Delaware Oaks she again upset Forward Gal and Alma North along with multiple stakes winners Deceit and Eggy.

Lauries Dancer was owned by Mrs. Arthur (Helen) Stollery and bred by Angus Glen Farm, of Unionville, Ont., her husband’s highly successful breeding operation. She was named after their daughter, Laurie. Trainer Jim Bentley and jockey Sandy Hawley, both members of Canada’s Horse Racing Hall of Fame, were instrumental in the filly’s success. In the Delaware Oaks she was running last in the eight-horse field, but Hawley had his mount in the right place at the opportune time when the leaders drifted out at the top of the stretch. He rushed the filly along the rail from fifth place to the lead and won by almost three lengths. In the Alabama, where she paid $27.40, Hawley simply circled the field and drew away under a hand ride, winning by three lengths.

At age two Lauries won twice in eight starts, finishing out of the money only once. She had third-place finishes in both the Natalma and Mazarine Stakes. Besides her victories at home in the Canadian Oaks, she captured Bison City and Star Shoot Stakes and was third in the Manitoba Derby against males. At four she won the Maple Leaf Stakes. The bay filly set a track record (1:48) at Fort Erie – Susan’s Girl, Numbered Account, Typecast, Manta, Forward Gal, Alma North, Deceit and Chou Croute.

An injury in Florida at the start of her five-year-old season ended her career, in which she won 13 of 35 starts and was second or third in 12 other races. 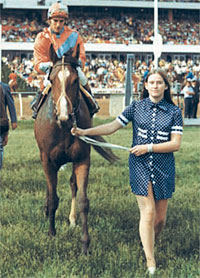