Multiple World Champion Armbro Feather was slow starting her racing career with only five starts as a two-year-old. She made her first start at Buffalo Raceway on May 14, 1986 winning by three lengths in 2:09.2. She followed up with four more wins – including her first stakes win in the Red Jacket Series –and dropped her time to 2:03.3.

The Most Happy Fella – Brets Velvet filly became the second richest pacing mare of all time with earnings of $1,454,927. From 90 lifetime starts Armbro Feather amassed 56 victories. In her final year of racing, she paced eight miles better than 1:55; two of which were world records.

Armbro Feather came from the breeding stock of the well-respected Armstrong Bros., in Inglewood, ON, who decided to keep and race the filly. Armstrong Bros. handed training privileges over to Hall of Famer Jack Kopas who described her as the greatest horse he’d ever trained.

As a pacing mare Armbro Feather went on to capture the Roses Are Red Stakes, Jugette, Breeders Crown and finished second by a very slim margin to world’s fastest pacer Matts Scooter. She won an O’Brien Award in 1989 as Canada’s Older Pacing Mare.

When Armbro Feather eventually headed off to the breeding shed, whom should she meet but Matts Scooter! Armbro Feather produced 11 foals while an Armstrong broodmare, none of whom came close to their mother’s glory.

In November 2003, Armbro Feather was sold at the Standardbred Horse Sale Company’s Harrisburg sale as part of the Armstrong Bros. pacing mare dispersal. Despite her less-than-stellar production record, Winbak Farms’ Joe Thomson did not hesitate to purchase her stating, “A lot of her speed came as an older mare. Maybe the people who buy yearlings from mares like this don’t have the patience to wait for them.” 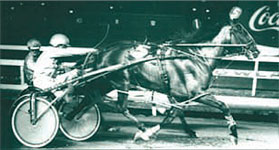