The Alberta based As Promised excelled on the racetrack and in the breeding shed. The son of Abercrombie was a multiple stakes champion with 71 race victories and earnings of over $669,000. As Promised has enjoyed a stellar second career as a stallion, siring winners of more than $14 million including 46 performers with earnings in excess of $100,000 including Breeders Crown champion Rons Girl.

The colt came close to dying in California early in his three-year-old year but recovered to dominate the Alberta circuit, winning 10 consecutive races enroute to a season that included multiple stakes wins, $219,582 in earnings and 23 victories in 28 starts. His four-year-old season was also productive as he won 18 of 30 races for $196,107 and set his career mark of 1:50.2 .

When he retired Clark stood the horse himself, breeding small books of mares and then decided to sell him. Dr. David Dyrholm’s Sky West Farms purchased the stallion in late 2000. His popularity as a sire has propelled him to be Canada’s most prolific stallion, breeding 307 mares in 2005 for a North American record.

Nazko Promise was the first son of As Promised to head to the stud barn. In 2003, As Promised was the leading sire of three-year-olds in North America in the category of average earnings with $71,238.

He has sired Alberta’s Horse of the Year three times, and numerous provincial divisional champions. Many of today’s Alberta Sires Stakes races have six or seven offspring of As Promised in each division. Top performers sired by As Promised include: World Champion and Breeders Crown champion Rons Girl ($576,458), Dudes Leaving Town ($540,129), and Disagreement ($524,739).

For the past two years As Promised has traveled to Australia as a dual hemisphere stallion where he has bred 100 mares each year in addition to his Alberta stud duties.

As Promised is currently owned by Dr. David Dyrholm and Larry Thomas of Alberta. According to Dr. Dyrholm, the greatest quality that As Promised passes on to his progeny is, “the will to please”. 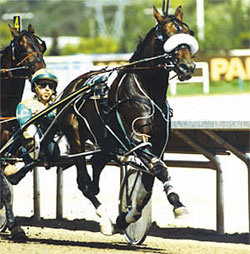