Run The Table was a major stakes winner in all three years of his racing career but his notoriety in the Canadian racing scene was as a formidable stallion in the 1990s for the McNivens of Killean Acres in Ingersoll, Ontario.

Run The Table was a world champion pacer during his career (p, 3, 1:51.1m) and has the distinction of being the sire and grandsire of world champions.

During his racing career the bay colt won a total of 20 races and surpassed $1.1 million in earnings. One of his major achievements was the fact that he was the first horse to defeat the seemingly invincible Jate Lobell in 1987 at The Meadowlands. In five meetings with Jate Lobell, who was the USTA’s champion three-year-old pacer that season, Run The Table won four times.

Following the end of his four-year-old year, he was purchased by Killean Acres and stood the 1989 breeding season at the Ingersoll nursery for a fee of $5,000.
Top performers were abundant in Run The Table’s first two crops and the young stallion showed his ability to produce good racehorses from all types of mares. 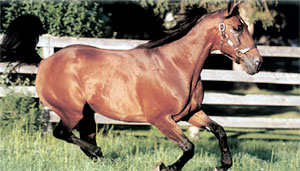