If there was an ultimate moment of elation in the racing and breeding of thoroughbreds for Steve Stavro, and there were several during the almost forty years he owned them, it had to come in the 1999 Canadian International when Thornfield, the longest shot on the board, conquered a classy field of turf performers. Some might argue that another “upset artist”, Benburb, provided as much satisfaction for Stavro when the colt that he had bred upset Queen’s Plate winner Alydeed in the Prince of Wales, and then knocked off a blue-chip field that included U.S. Horse of the Year A.P. Indy, Technology and Alydeed in the Molson Export Million. Thornfield and Benburb each won a Sovereign Award as Canada’s Horse of the Year. Stavro was a passionate Canadian. He would fly the Maple Leaf flag at each of his Knob Hill Farms’ stores and at his Woodbine stable. Witnessing his blue and gold satin silks cruising to victory in the $1.56 million Canadian International and the Molson Export, he was overcome with pride; proud that he had been successful in developing world-class performers to represent Canada.

Knob Hill’s Sovereign Award winners besides Thornfield and Benburb were Apelia, Saoirse, Bold Debra, Chopinina. Stakes winners included Granacus, Zadracarta, Megas Vukefalos, Volterra, San Romano, Wolark, Dargai and Debra’s Victory. They were among his more than 50 stakes winners. Granacus won the Blue Grass Stakes (Gr I) at Keeneland and Zadracarta was second by a nose in the Prix de l’Abbaye at Longchamp in Paris. On numerous occasions Stavro-bred horses ran in major U.S. events, including the Breeders’ Cup. He often bred his mares to top stallions in Kentucky, but had success breeding to a horse he once raced, Cool Victor (sire of Queen’s Plate winner Victor Cooley), who emerged as a commercial sire instead of just serving Stavro’s mares. In 1988 he bought a 300-acre farm in Kentucky which he named after his stakes-winning filly Volterra. Under the guidance of trainer Phil England, Stavro’s best campaign was 1992, when he was named Canada’s outstanding owner and breeder. Previously only Sam-Son Farm and Kinghaven Farms had ever swept both awards in the same season. He won nine stakes races with six different horses that year and the stable earned $1.8 million.

His interest in horse racing began in 1967 when he acquired a pair of yearlings – Boy Bandit and Danforth Dan. They were conditioned by J. C. Meyer. Through the years Meyer, Pat Collins, Danny Vella and England were largely responsible for the stable’s success. Stavro served on the Board of Trustees of the Ontario Jockey Club, was an Honorary Director of Woodbine Entertainment and a member of The Jockey Club of Canada. He was the founder of the Knob Hill Farms big box grocery store chain in Ontario. He closed the stores in 2000. A major supporter of Canadian sports, from hockey to soccer to horse racing, Stavro became the controlling shareholder in the early 1990s of the Toronto Maple Leafs and became chairman of the board of parent company, Maple Leaf Sports and Entertainment, in 1991. He also served as an NHL governor and sat on the board of Air Canada Centre. He sold his stake in MLSE in 2003. Born in 1927 in Macedonia, Stavro died in April, 2006, at the age of 78. Later that year one of his last yearling purchases, Leonnatus Anteas, went 3-for-3, all in stakes races, and was named Canada’s champion 2-year-old. 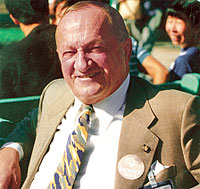