For what seemed an eternity to the drivers he competed against, Doug Brown dominated the Canadian driving charts and was the Ontario Jockey Club circuit’s leading dash-winning driver from 1988 to 1997. He was voted an O’Brien Award as Canada’s Driver of the Year a record seven times in the first eight years the honour was awarded. Brown is best known for his driving ability with 8,173 race wins and over $87 million to his credit. Doug also sports impressive training credentials, having conditioned 321 winners and horses with earnings of almost $4 million. Brown was the Woodbine Entertainment circuit’s all-time leading driver and won an incredible 3,212 races locally during the 1990s. He was the first driver to top the $5 million earnings marker in one year (1995) and was the only driver to win at least 400 races twice on the OJC (1994 and 1995). In 1995 he drove Canada’s first sub-1:50 mile with Ball and Chain, when he upset the odds on favorite, Pacific Rocket, and Ellamony in 1:49.4 at Woodbine.

Doug was born September 11, 1955, in Oshawa and is now a resident of Bowmanville. At age 17 he made an impressive debut in the bike, winning with his first ever drive with Out Ahead at Kawartha Downs. It was also at Kawartha Downs that Brown reached two more major milestones, picking up his 8,000th career victory on October 5, 2004, with a horse called Solar Jasper. He became the 12th driver in North American harness racing history to do so. Shortly after, he surpassed $85 million in career driving earnings. He also holds the Canadian record for a streak of consecutive million dollar seasons, having driven horses to purse earnings of a million or more for 25 years.

Brown has driven the winners of five Breeders Crown titles, including back-to-back championships with the great pacing mare Town Pro. Doug was part owner and the regular driver of world champion Town Pro, who was an O’Brien Award winner at age two and three and was named Canada’s 1990 Horse of the Year. She amassed more than $1 million in earnings. Town Pro was inducted into the Canadian Horse Racing Hall of Fame in 2004. Other career driving highlights for Brown include winning the 1993 Metro Pace with Historic; the 1997 Yonkers Trot and World Trotting Derby with Lord Stormont, and the 2001 Maple Leaf Trot with Plesac. Other talented performers he drove include Dr No, Topnotcher, Invitro, a horse he trained and drove that won over $1 million, Brees Brief, the trotting sensation Lord Stormont and world champion Riyadh.

Doug was a member of the Oshawa Sports Hall of Fame and was selected as the Harness Horse Youth Foundation’s recipient of the 1998 Service to Youth Award. In 1997 he was the winner of the prestigious Messenger Award from Harness Tracks of America for outstanding accomplishment and meritorious service to the sport. 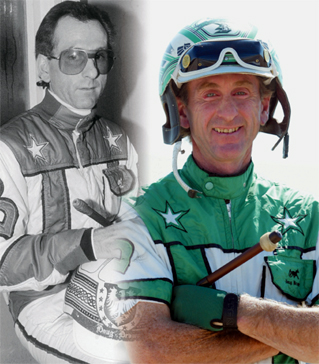