lifetime goal of any trainer in North America is to saddle the winner of the Kentucky Derby. In 1983, and for the first time in the storied history of the Derby, a Canadian-bred colt, owned and trained by Canadians, wore the blanket of roses at Louisville’s Churchill Downs. Trained by David C. Cross Jr., who grew up in Vancouver, and owned by David (Pud) Foster of Toronto, Sunny’s Halo came into America’s most famous race with only two preps in his three-year-old campaign. However, he defeated 19 other opponents with a gutsy stretch run, winning by two lengths. The training accomplishment by Cross was nothing short of a miracle.

As a juvenile in 1982 Sunny’s Halo won a Sovereign Award, capturing two of the most important events for two-year-olds, the Coronation Futurity and Grey Stakes, as well as the Colin and Swynford Stakes. Stress fractures in both front shins prompted Cross to halt his season and that winter the colt was shipped to Hollywood, Calif., where he embarked on a program that Cross hoped would lead to the Derby. After giving “Sunny” sufficient stall rest he began an almost daily routine of swimming the colt in the backstretch equine pool, building up the much needed muscle tone and stamina without putting pressure on the colt’s still healing shins. 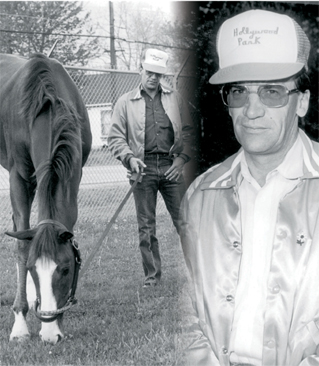 Despite the long layoff the colt in his three-year-old debut won the Rebel Stakes at Hot Springs and followed with a victory in the Arkansas Derby, which earned “Sunny” and his owner, Pud Foster (the man who had brought Cross to Toronto in 1970), a trip to the Derby. A severe skin infection prevented “Sunny” from running in the Queen’s Plate. But later that season he finished third in the Whitney Handicap at Saratoga against older horses before shipping to Louisiana for the $1 Million Super Derby, which he won by 12 lengths in track-record time.

Sunny’s Halo was just one of many major winners (eight in graded stakes races) that Cross trained during a career that goes back to the 1940s when he began “walking hots” at Vancouver-area tracks. Classic Cat won the Lexington Stakes, Ohio Derby and Remington Park Derby and finished third in the 1998 Preakness. Cross’s other stakes winners in the U.S. include Dianes Halo, Quintana, Code Love and Majestical Moment.

He saddled his first winner at Longacres, Wash., in 1957. His career then took him to Arizona, New England, Florida and New Orleans before heading to Woodbine. In Canada he won the Dominion Day, Marine and Wood-stock Stakes with Big Destiny; the Display and Autumn Stakes with Decent Davey and the Fury and Bison City Stakes with Snow Game. Some of his other stakes winners include Loving Laura, Lady Shooter, Empiric, Arc ‘o Fire, Admiral JB, Joe Flats, Royal Farm and Pugnacious.

In 2007 Cross was employed at a farm in Hillsburgh, Ont., breaking yearlings and preparing horses for the races. He occasionally saddled a winner for clients. 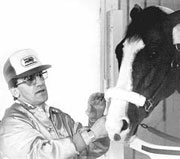