Jim Day was one of Canada’s most honored and accomplished horsemen. A gold medal winner in the team equestrian event at the1968 Olympic Games in Mexico, Day switched his attention to training thoroughbreds in 1978 as conditioner for Sam-Son Farm. His list of achievements while recording 1,150 victories prior to the 2007 season was truly exceptional. Four times he earned a Sovereign Award as Canada’s leading trainer – 1979, 1985, 1988 and 1991. In addition to the numerous Sovereign Award champions he managed and developed, five of them won Horse of the Year honors – Dauphin Fabuleux, Imperial Choice, Ruling Angel, Dance Smartly and Peaks and Valleys.

Day won two Queen’s Plates, with Regal Intention in 1988, and with Hall of Fame filly Dance Smartly, the first female to win Canada’s Triple Crown and this country’s first Breeders’ Cup champion, winning the Distaff at Churchill Downs in 1991. Dance Smartly and Sky Classic, the leading mile turf horse in 1992, each won Eclipse Awards. He also trained Dance Smartly’s dam, Classy ‘n Smart, filly champion of 1984. During his tenure with Ernie Samuel’s Sam-Son Farm, the stable rose to the top of the owner standings, winning five Sovereign Awards. It also won an Eclipse as the leading owner in North America in 1991. 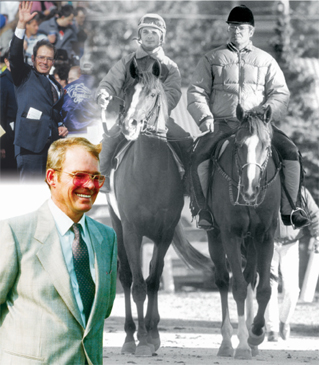 Day’s accomplishments were not restricted to his reign as the trainer for Sam-Son Farm. In 1995, a year after leaving Sam-Son, he trained Pin Oak Stable’s Peaks and Valley to Horse of the Year honors in Canada. Day is also a breeder of note. He bred One Way Love, who was voted Canada’s champion older horse in 2000. More recently he bred, developed and trained Woodbine Oaks’ winner Too Late Now for his mother, Edna Arrow. Too Late Now was voted a Sovereign Award as champion 3-year-old filly of 2003.

Among his many other Sovereign Award and stake winners are Grey Classic, Blue Finn, Rainbows For Life, Wilderness Song, Radiant Ring, Tot of Rum, Colorful Vices, Desert Waves, Bold Ruritana, Honor Glide, Wave Wise, Victorious Emperor, Devilish Gleam, All An Angel, Tilt My Halo and Always A Rainbow. Day also accomplished a feat no other trainer will ever duplicate – winning the coveted Cup and Saucer a record 10 times – between 1982 and 1994. He also won the Coronation Futurity four times. In the year of his induction, Day managed a public stable – Come By Chance Stable.