Jacques Hebert’s career in harness racing embodies class, integrity, longevity and remarkable consistency. He was deemed by his peers as the “consummate horseman”. Hebert achieved a superior record in training and driving during the past three decades of his involvement in the sport. He started out by working with his father Joseph and his uncle Cyprien at Trois Rivières, Que., and launched his driving career in 1958 when he obtained his driver’s license at age 15. Based in Montreal since his twenties, the Drummondville native has driven over 100 winners each year since 1971, a record that unquestionably earned his induction. In 1999 he was named Montreal’s Driver of the Year for the first time after a season that saw him become North America’s 35th driver to surpass 5,000 wins. Since then, he’s been Driver of the Year in Montreal numerous times, won the annual drivers’ tournament and captured virtually every stakes race in Quebec.

The victories he relished the most are those that came outside the province, with Electric Stena in the 2000 James B. Dancer Memorial at Freehold Raceway and the Simcoe Stakes at Mohawk. In 2001 he was the inaugural winner of the Quebec Couriers Elite Trophy, leading all drivers in the point standings for competition in Circuit Quebec Elite and Series Quebec Plus events.

Hebert said in a 2000 interview in The Canadian Sportsman that the horse that gave him the most joy was Golden Lee, a pacer he owned with the late Moe Graif. “We raised him, overcame problems with him, raced him until he was eight, and made about $500,000 with him. He wasn’t the best I drove, but we had so much fun with him.” As of December, 2007, Hebert had 5,953 wins and had driven horses to over $40 million in purse earnings and trained 1,052 winners with earnings of over $8.4 million. 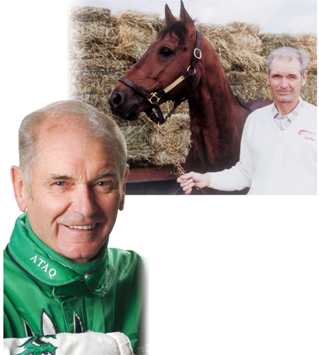