There wasn’t a tougher, more competitive or versatile horse then Anita’s Son in the early years of Woodbine. Twice he was named Canada’s Handicap Horse of the Year (1960 and 1961) and won 16 stakes races during his four-year campaign. The Irish-bred colt was owned by M.J. (Jim) Boylen’s Lanson Farms in Malton, Ont., trained by Art Warner and ridden for much of his career by Hugo Dittfach.

When it was announced that he was going to stud, the Daily Racing Form said, “Anita’s Son had the speed of the top class sprinter, middle-distance stamina, and the consistency, adaptability and willingness of the genuine thoroughbred. Over the grass, dirt, wet or dry, he could stay with the fastest pace, take command without fuss at the discretion of his rider and defend himself thereafter with gusto.”

In 1961 at age five, Anita’s Son tied Nearctic’s Woodbine and Canadian record for six furlongs (1:09 1/5) in winning the Highlander Stake. Another of his outstanding performances came in the Dominion Day Handicap in 1960. Top weighted with 128 pounds, he upset a field loaded with stakes winners from the U.S. and Canada. Dittfach recalled him winning while carrying 134 pounds. “John Bell was on a horse carrying 104 pounds that day and I said there was no way I was going to beat him giving away 30 pounds. But we did. This horse was so good, ‘he was a freak’. The day he tied the six furlong record we could have gone in ‘8’. But what was the use! Every time we won big they would add more weight the next time out. He did anything you asked of him.”

In 40 starts he won 22 races and was in the money 11 times, winning at distances from six furlongs to 1 1/4 miles on the dirt and at 1 1/8 miles on the turf. In his juvenile season the bay colt stamped himself as a potential champion by winning the unrestricted Grey Stakes under top weight over 14 rivals on a sloppy surface. Throughout his career Anita’s Son wasn’t eligible to enter races restricted to Canadian breds because he had been foaled in Ireland. Shipped to Canada as a weanling, he was raised as a yearling at Bill Hatch’s farm in Agincourt before moving to Boylen’s place. Brilliant at three, winning the Marine, International, Toronto Cup, Fair Play and Queenston, Anita’s Son for the next two years dominated the handicap division, winning the Dominion Day, Eclipse, King Edward Gold Cup, Swynford, Vigil, Auspicious, Highlander, Seaway, Fort Erie and Sandown Stakes and hitting the board in six other stakes races. 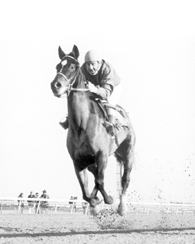