Cool Reception, the flame-haired chestnut colt, will always be regarded as one of the top Canadian thoroughbreds, not only because of the outstanding racing ability he showed during his too-brief career, but because of the great courage he displayed in finishing second in the 1967 Belmont Stakes. He had run the last 200 yards on a broken foreleg, charging until he hit the wire, second behind Damascus. “He finished the last sixteenth on pure guts,” said jockey Johnny Sellers. After the race trainer Lou Cavalaris Jr., knew the horse’s racing career was finished. But luck didn’t ride with Cool Reception even in hospital – and he had to be destroyed instead of going to stud.

The son of Nearctic looked like a champion even before he was sold at breeder E.P. Taylor’s pre-priced sale of yearlings. Cavalaris recalled watching the colt run in the paddock at Windfields. “I’ll never forget the sight of that big son-of-a-buck running across the field against the setting sun with his golden mane flying. I knew then that I wanted to train him but I didn’t think I had any chance.” His chances of getting the colt seemed slim. Because Cool Reception was such a standout, numerous bids could be expected. A draw for the colt went to Larkin Maloney, whose trainer was Carl Chapman. The colt began his racing career under Chapman’s care but midway through 1966, Maloney retired from racing and turned his stable over to his two daughters, Mrs. Bill Seitz and Mrs. Vincent Reid. They decided to use Cavalaris as trainer and so Big Lou got the colt he had admired after all.

After finishing second in his first two starts, Cool Reception won seven in a row, including the two richest 2-year-old races in Canada, the Coronation Futurity and The Cup and Saucer, as well as the Summer and Carleton. It was obvious that the colt was the top juvenile in the country but his owners felt he might be more than that and sent him to Aqueduct, N.Y., for the Remsen Stakes to try the best in the U.S. He finished fifth, beaten less than three lengths. The effort was good enough to convince his owners that they should send the colt to Florida for the major 3-year-old races. After a fourth-place finish in the Hibiscus he followed up with an impressive third in the Bahamas. Three weeks later in the Everglades, however, Cool Reception raced poorly. The colt had a bone chip and Lou didn’t want to risk further injury.

In March, after winning two races in Toronto, he was sent to Kentucky to prepare for the Derby. When the colt finished second in the Derby Trial, many thought he had earned the right for the Derby, but Cavalaris decided his colt was not ready and shipped him home to Canada. “The Queen’s Plate is the big one we want to win,” he said. Back in Canada Cool Reception galloped to an eight-length win in the Marine Stakes. That smart effort was enough to convince his trainer that the colt was now at his peak and deserved a shot at the best colts in the Belmont; so the colt was sent to New York for his dramatic appointment with destiny. Going down the backstretch he went to the front. Kentucky Derby winner Proud Clarion took a run at him as they made the turn into the stretch but was unable to get by and backed off. Then it was Preakness winner Damascus’s turn to try Cool Reception. Mid-way through the stretch he got past the Canadian colt. It was sometime during this part of the race that Cool Reception suffered the fatal injury. 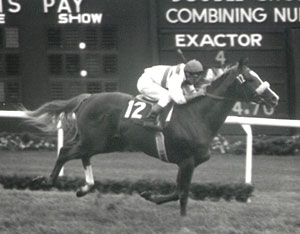