Armbro Omaha inspired national pride as a superb performer when he represented Canada in the Classic Events of his era.  When his racing career was replaced with a breeding career, he performed with the same impact he demonstrated on the race track.

For over a decade he was among the top sires in the nation and then he showed second generation influence as well in his daughters that produced notable offspring.

Armbro Omaha won the Canadian Juvenile Stakes at two and the next season he dominated the three-year old pacing ranks, capturing two legs of the Pacing Triple Crown, the Little Brown Jug and the Messenger Stakes.  He also won the prestigious Adios Stakes, the Shapiro and Canada’s Prix d’Ete.

Armbro Omaha was the first Standardbred to win five races worth $100,000 in a single season long before there were any huge purses in the years to follow.  Voted three-year-old pacer of the year in 1974, he was the leading money winner of any age, gait or gender and his 1:56.1 race winning time ranked him among the fastest 25 pacers of all time. During his racing career, he won over $386,000.

As a sire, Armbro Omaha left an indelible imprint on Canadian pedigrees.  The was partly because of his ability to pass on his rugged constitution and partly because his bloodlines crossed well with the well bred mares of the Albatross, Most Happy Fella and Bret Hanover lines.

In the 13 years that he had performers in the Ontario Sires Stakes program, he had 13 leading money winners beginning when Alberton led the two-year-old colts, to 1991 when Twin B Kody dominated the three-year-old pacing colt ranks.

Among his top performers were innumerable stakes winners including his richest performer Twin B Playboy, a winner of almost $800,000, and his fastest performer, Twin B Kody with a record of 1:52.2.

Always known as a superior sire of females, Armbro Omaha has sired fillies and mares like Armbro Eva, Omaha Girl, Nine Across and Ima Chestnut, all winners of over a quarter million dollars.

Armbro Omaha came along in the early years of the Ontario Sires Stakes and without question helped to advance the quality of Standardbreds in Ontario until he retired from breeding in 1992. 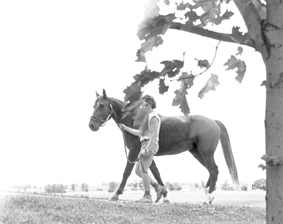