The only horse to defeat Moni Maker, the richest trotter in the world and North America’s Horse of the Year in 1998, was a local campaigner from Erin, Ontario, affectionately known as “Punky” by his owner/breeder George Peters of Brylin Stables. Glorys Comet’s feats were considerable. His accomplishments were marked by his longevity and earnings of more than $2 million in a 10-year career that concluded after his 12-year-old season.

The gelded son of Balanced Image-Lou Macs Glory was the first Standardbred in Canadian history to trot a 1:54 mile, setting a trotting record of 1:53.4. As he aged he added further laurels when he became the richest Canadian-bred Standardbred, passing No Sex Please ($1.8 million) in October, 1999. A year later he became the first Canadian-bred and sired harness horse to eclipse $2 million in lifetime earnings. Glorys Comet won 56 races during his illustrious career, including 53 sub 2:00 miles against the best horses in Canada and the United States. He earned more than $100,000 in seven of his 10 racing seasons and also held track records at Mohawk and Woodbine simultaneously. Glorys Comet’s drivers for much of his career were John Holmes and John Campbell.

Trained by Peters, he received an O’Brien Award in 1997 and 1998 as Canada’s Older Trotting Horse champion. He was also recognized for his achievements south of the border with a Dan Patch Award as Trotter of the Year for 1998, which was his best season. He raced every month of the year and finished first, second or third in 24 of 31 races for over $720,000. He raced against and beat some of the world’s top trotters – Magician, Fools Goal, Goodtimes, SJ’s Photo, Wesgate Crown, and of course, Moni Maker. His best race of the year was his dramatic last to first place sweep in the Trotting Classic at Mohawk, which was characteristic of his durability, a toughness that saw him endure many first over trips.

His stakes victories included the Maple Leaf Trot, Horsemen’s Series Trot, Simcoe, Titan Cup, Cutler Memorial and the Trotting Classic as well as many OSS events. He was retired to Brylin Stables’ farm in Erin in 2002. This is the home of George Peters, his partner Marcia and George’s son Bryan, who raised “Punky” as a youngster.

Glorys Comet celebrated his 25th birthday on March 19, 2016 and he did it in style, surrounded by some of his favourite people and enjoying some of his favourite treats.  Sadly just two days later, the decision was made to humanely euthanize the big trotter.  It was a bittersweet decision for his connections, but one they knew was necessary.

Additional information about the life and career of Glory’s Comet can be found here. 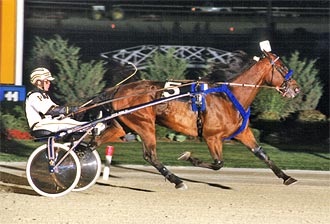