The individual considered to have had a major impact on the business of horse racing in North America is David Willmot, Chairman and CEO of Woodbine Entertainment Group. Industry officials, representing both the thoroughbred and standardbred sides of horse racing, have lauded his influence in rescuing the financially-troubled Ontario Jockey Club in the mid 1990s and making it the model for other racetracks. Willmot, born in St. Catharines in 1950, and his father, D.G. (Bud) Willmot, built Kinghaven Farms in King, Ont., into one of Canada’s premier breeding and racing stables. During a 30-year period it won the Queen’s Plate five times, bred or raced more than 150 stakes winners (including Triple Crown winners Izvestia and With Approval, Horse of the Year recipients Play The King and Alywow and Hall of Famer Carotene), and purchased Cool Mood, a filly from Northern Dancer’s first crop in 1967. She went on to create a bloodline that produced Izvestia, With Approval and Belmont Stakes winner Touch Gold. On numerous occasions Kinghaven was awarded a Sovereign Award as the leading breeder or owner. 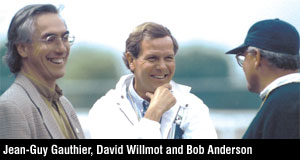 However, it has been his influence in the boardroom and far-sighted approach to the modernization and technological advances in the industry that catapulted him into the lofty position that he is held by horsemen. With the innovation of slots and the greater distribution of wagering through HPI (via telephone and internet), and its advancements in televising the sport, he’s made Woodbine and Mohawk the envy of North America. When Willmot became the first Canadian to be elected president of Harness Tracks of America (he’s now vice-chairman), it prompted its executive vice-president, Stan Bergstein, to state that he “is a futurist, a far-seeing executive who understands the importance of the Internet and TV. I find him probably the greatest and most articulate racing executive in North America. His moves in attracting the slots to Mohawk and Woodbine and in his extensive renovations are courageous and far-sighted.”

A director of the OJC since 1984, Willmot was elected president and CEO in 1995, and chairman in 2001. Among honors he has received are the E.P. Taylor Award from The Jockey Club of Canada, the Mint Julep Cup for outstanding contribution from the CTHS, and the Galbreath Award for outstanding entrepreneurship in the equine industry. He has served as a member of The Jockey Club, a director of Breeders’ Cup, the Executive Council of the International Federation of Horse Racing Authorities, Steward of The Jockey Club of Canada and vice-president of the TRA. He was also among The Thoroughbred Times top 20 industry leaders in 2000 who “has had the greatest impact on the sport” and got the overwhelming nod as The Canadian Sportsman’s inaugural person of the year in 1999. In 2000 Willmot ventured into the ownership of standardbreds with Bob Anderson. They acquired the trotting filly Southwind Allaire, which won the Hambletonian Oaks and almost $1 million. “It’s like someone just getting into the thoroughbred business and owning the Kentucky Oaks winner with a first purchase,” he said. Their outstanding 2-year-old pacing filly Cabrini Hanover also set a world record in winning She’s A Great Lady Stakes at Woodbine. Both fillies were divisional champions and winners of the coveted O’Brien Award.