How good was Wonder Where in 1959, the year she won the “toughest race” of her career to earn honors as Canada’s Horse of the Year?

Consider these statistics. The big strapping 3-year-old bay filly earned 10 of the 18 votes in the balloting of sports editors, turf writers, handicappers, the Canadian Press and Daily Racing Form staff. The runner-up with seven votes was New Providence, Canada’s first Triple Crown champion that year. The only other horse to be considered was the superb 2-year-old champion Victoria Park, who received one vote.

Wonder Where frequently challenged the males in stakes competition, winning the Woodstock and Achievement Stakes, placing second in the Challenge Stakes Handicap and Bison City and third in the Durham Cup. She was owned by Larkin Maloney and Conn Smythe, trained by Yonnie Starr, and captured eight stakes races that season. Her other stakes victories came against the fillies or mares in the Canadian Oaks, Belle Mahone, Maple Leaf, Selene, Fury and Star Shoot. Fifteen of her 17 starts in 1959 came in added-money events. The daughter of Occupy was out of the money only once, when she finished seventh in the Canadian International Championship.

At two she won the My Dear Stakes and then beat the boys in the Clarendon, winning five of eight starts. After her remarkable 3-year-old season, Wonder Where was just as dominant at age four, winning five of eight starts – including the Canadian Maturity, Inferno, Nassau and Whimsical Stakes. In 33 lifetime starts Wonder Where won 19 times, finishing second or third on 12 occasions. She was off the board only twice during her incredible career.

Bred by Frank Selke at his Rolling Range Farm in Quebec, she was purchased by Smythe and Maloney for $7,300 at the CTHS’s yearling sales in 1957. Wonder Where was retired to the broodmare shed in 1961 for the Maloney family. A mating with Northern Dancer produced her best offspring, Sno Where, who won the Bison City, Fury and Ville Marie Stakes but finished third in the race named after her mother, the Wonder Where Stakes in 1969. It is now one of the three races that comprise the Royal Tiara, Canada’s Triple Crown event for 3-year-old fillies. 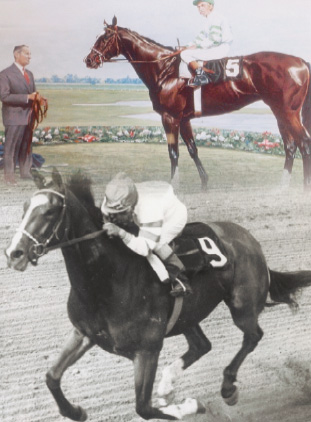