Chris Van Bussel (1941-2002) was one of the prominent leaders who helped direct the now prosperous Ontario standardbred breeding industry through its infancy. In 1969 Chris and his brothers gradually built Seelster Farms of Lucan, Ont., into one of Canada’s premier standardbred nurseries. Some of the stallions included Goodnuff, Tarport Count, Worthy Bowl, Armbro Splurge, River Rouge, Totally Ruthless, Threefold, Eager Seelster, Intrepid Seelster, Berndt Hanover, Western Maverick and Camluck, who became the first Canadian-based pacing sire to lead North American progeny earnings. Seelster has been at the forefront of numerous innovations in the breeding industry, using artificial insemination exclusively since its inception.

Seelster sold its first yearling in 1970, and Seelster raised horses were regarded highly throughout North America. Chris received praise from his peers for the excellent preparation of yearlings. Many have copied his successful program. Outside of the breeding operation, Chris served as a longtime director of the Western Fair Racing Committee. He was a director (1978 – 1979) and president (1987 – 1988) of the Canadian Standardbred Horse Society and received the CSHS General Achievement Award in 1990 in recognition of his excellence, leadership and contribution to the breeding industry. Chris was instrumental in introducing freeze branding technology, which allowed breeding farms to identify foals within days of birth. He was also a proactive force in the creation of the Ontario Sires Stakes program, Trillium Series and introduction of computer systems to the various racing associations.

Chris was a committee member of the Ontario Sires Stakes publicity and promotion committee and a director of the Standardbred Breeders and Owners Association in the 1980s. He worked with fellow directors to successfully lobby the Federal Government not to impose the GST on wagering and as an SBOA director, assisted with advising and consulting the provincial government on issues pertaining to the introduction of slots. 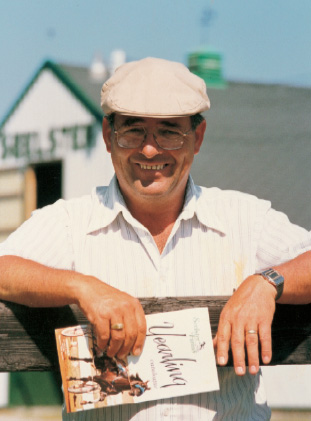