Don McClelland had a dream to breed a top Canadian racehorse and in a half-century of raising his own thoroughbreds he achieved this goal. McClelland, who died Jan. 25, 2003, at age 82, realized his quest on more than one occasion, but especially with Dauphin Fabuleux, a colt he sold for $77,000 at the CTHS annual yearling auction in 1983. The colt won two Sovereigns as Canada’s champion two-year-old and Horse of the Year. Thirty years earlier McClelland achieved his initial success as breeder of King Maple, Horse of the Year in 1953.

McClelland took over the family’s thoroughbred and farming business in 1949 from his father, Ronald, who owned Maplewood Farm in King City. In 1951 Maplewood was sold and Don and his wife Jane Anne established Farm On A Hill.” When Jansum Regal (the dam of Dauphin Fabuleux) died, McClelland kept her last foal, Myrtle Irene, for breeding purposes. His son, Ian, said, “If you saw my father trying to break her, you’d never think she would amount to anything. Here was this guy with long legs on a horse that looked like she needed to grow a foot.” But powerful little Myrtle Irene didn’t let her size stop her. She won 14 of 42 races, including five stakes races from ages three to five, and earned over $713,000.“Myrtle revitalized our farm. We were able to do a lot of repairs, put an extension on our arena, build new fences and clean up some fields,” said Ian.

In the late 1950s and early 1960s his black-type winners included multiple stakeswinning Real Sensible, Rhythm Sal, Grand Passion, Yonge Castlefield and Greek Salt. Fair Juror, who set Woodbine’s 6 1/2-furlong track record of 1:14.60 (set in 1961), was bred by McClelland. The best horse bred by McClelland in recent years was Gandria. Sold for $60,000 at the 1997 Canadian Breeders’ sales, Gandria finished second in the Queen’s Plate to Woodcarver before turning the tables on the Plate champion in the Prince of Wales at Fort Erie. She was named Canada’s champion 3-year-old filly. McClelland was an active member of the CTHS and president of the organization in the 1970s. He was a member of The Jockey Club of Canada and was a firm believer that the thoroughbred business began and ended with the horse, as well as a solid breeding program. He once said, “We should realize that the racing industry cannot survive with only the big players: we have to support and encourage the bottom end.” 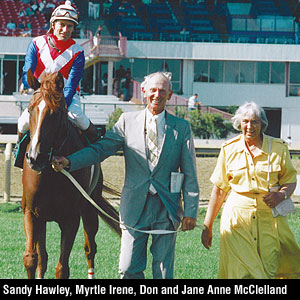