In 1955 Ace Marine captured the final running of the Queen’s Plate at Woodbine Park, the aging but still beautiful track that had hosted its first Plate race in 1876. Bred by Carr Hatch, the chestnut colt by Ace Admiral-Mazarine, was trained by Yonnie Starr and owned by Larkin Maloney, who acquired him for $8,500 at the annual yearling sales.

At age two he won twice but possibly his best race was a third-place finish to the world’s fastest sprinter, Boston Doge, in the Newport Stakes at Narragansett. The following year he accomplished a feat that will never be equalled. Not only did he win the Queen’s Plate, Prince of Wales and Breeders’ Stakes, but he also won two divisions of the Plate Trial. The OJC offered Plate Trial Stakes’ races at six furlongs and a mile and 70 yards; there were so many entries that seven divisions were needed to facilitate eager trainers. The only horse to win at both distances, Ace Marine was largely ignored by the bettors in the Plate and paid $13.20. Breaking from the no. 11 post he was never headed in a wire-to-wire victory.

Ace Marine was a rugged competitor and developed into a versatile performer after his triumphs in the three races that now comprise Canada’s Triple Crown. (Although he wasn’t recognized as a Triple Crown champion when he won, as the event wasn’t inaugurated until 1959, those horses who achieved the milestone before that date were grandfathered in as a Triple Crown winner in 2014. He was voted Canada’s Horse Of The Year, adding the Seagram Cup and Durham Cup Handicaps to his stakes’ portfolio. At four, running at the newly opened Woodbine, he captured the Dominion Day Handicap in record time and the Canadian Maturity. Despite 14 lifetime wins, including nine in stakes races and being stakes-placed in five others, he competed in an era when the purses were paltry and failed by $9,091 to gain entry into the coveted “$100,000 Club.” 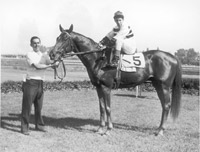