On May 21, 1932, a day in which the daring aviatrix Amelia Earhart made history by becoming the first woman to fly solo across the Atlantic Ocean, doing it in record time as well, another “lady” also established a speed record when Queensway, a 3-year-old chestnut filly, became the fastest winner of the King’s Plate at Woodbine Park. Owned and bred by R.W. R. (Bob) Cowie of Weston, Ont., Queensway’s time of 1:55 1/5th knocked 3/5ths of a second off the Plate record for 1 1/8 miles.

Queensway’s three-length win for jockey Frank Mann and trainer Harry Giddings Jr., was accomplished with ease despite the fact that she suffered a few minor cuts about the legs during a 10-minute skirmish at the new “Waite” starting gate – a stationary barrier that was used for the first (and last) time in a Plate race. It resembled a set of low racetrack stalls, minus the overhead bridge.

Her victory would also create a place in the record books as she would go on to win the Breeders’ Stakes at Woodbine and the Prince of Wales Plate at Thorncliffe, three races that today constitute Canada’s Triple Crown, which wasn’t formally recognized until 1959. Four days after her Plate victory she won the 42nd running of the Breeders’ Stakes. On June 3 at Thorncliffe, which was located east of Toronto in the village of Leaside, she captured the 3rd running of the Prince of Wales.

Queensway’s three victories in a span of two weeks came during the early years of the Depression. Purses and betting were down throughout the country and the purse for the King’s Plate was reduced to $7,500 from $15,000. Subsequently her earnings from these three stakes totalled just $9,940, plus the 50 Guineas. During a five-year, 52-race career, the daughter of Old Koenig won 12 races and was placed in 12 others. 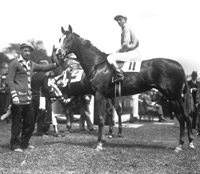