On February 6, 1954, at Joe Smith’s farm at Kemptville, Ont., a $400 broodmare called Symbol Piney gave birth to a well-formed, strong-looking foal whose sire was Henry Volo, a noted U.S. stallion. Smith’s brother, Claire, who was referee-in-chief of Woodbine Raceway trots, was possibly exaggerating at the time, although you surely understood what he meant when he said, “The little son-of-a-gun was pacing when he hit the floor.” In an article by Jim Proudfoot in the Toronto Star in 1961, it said: “What Claire Smith meant was that this little colt looked like a champion the first time any human cast eyes on him. For this reason he was named Champ Volo and he grew up to be the greatest pacer (at that time) ever foaled in Canada.”

Joe Smith acquired Champ Volo this way wrote Proudfoot: “He and Claire were attending the annual auction sales in Harrisburg, Pa., in 1953, and they snapped to attention when a 19-year-old mare in foal to Henry Volo was offered. Apart from the 2-for-1 aspect of the deal, the mare held other attractions. She was a full sister to Symbol Allen, which had been a big winner on the Eastern Ontario rural circuit.”

Champ Volo raced at two and three for Smith, capturing the Dufferin Stakes, Ottawa Valley Futurity and Beaver Stakes in Quebec and was named Canada’s 2-year-old pacing colt of the year. Sold to J. Louis Lévesque and then to Adrien and Gerard Miron, he became one of the premier invitation pacers in North America, winning the Quebec Pacing Derby, Queen City Pace, Canada Pace. At five he won the International Pace at Roosevelt in a dead heat with the New Zealand champ Caduceus and raced until he was seven, ending his career with 52 wins and a mark of 2:00.3h and earnings of $215,392. He retired to stallion duties at the Miron breeding farm in Ste. Augustine, Que. 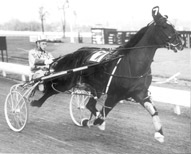