Murray Brown, who was appointed public relations director of Hanover Shoe Farms in Pennsylvania in 1967, was instrumental in the success of the largest standardbred nursery in the world. A native of Cote St. Luc, Que., Brown was educated in Montreal, where he first became interested in harness racing as a teenager, pursuing his interest through race office records and studying countless articles and books on breeding. His passion in racing developed through weekend jaunts to Richelieu Parc, Quebec City and Monticello and Vernon Downs in New York. At age 22 he joined Miron Farms in St. Augustin, which at the time was one of the leading race and breeding farms in Quebec. Brown stayed in their employ later as farm manager and as an adviser on breeding prospects. At the time the Mirons owned 70 to 80 broodmares. When Gerard Miron was stricken with cancer, a decision was made to reduce the size of the Miron operation. This led to Brown’s brief employ at Lana Lobell Farms in Pennsylvania. He later worked for a few months at The Harness Horse publication to gain experience in advertising and journalism, skills that would serve him well when he joined Hanover Shoe.

After joining Hanover Shoe he was named its publicity director. His primary responsibilities involved the marketing of its huge yearling consignments each fall and the promotion of the various stallions based at its nursery. In 1972 he assumed the role of vice-president and general manager of the Standardbred Sales Company, which each November conducted a yearling auction and mixed horse sale in Harrisburg, Pa. Brown was considered one of the best in the industry for his knowledge of pedigrees and detailed history of maternal families and valued for his opinion throughout the harness world. He has participated in numerous forums on breeding, conformation and market conditions and traveled upward of 30,000 miles annually, attending major horse sales, race meets and major stakes races and significant racing events. 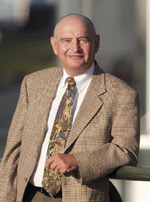