When Whistling Sea became the first horse from Western Canada to win the Queen’s Plate in 1965, famed columnist Jim Coleman wrote: “Thoroughbred racing came of age in Canada on Saturday afternoon… the Plate is now an event of genuine national interest.  “The trainer was Roy Johnson, a 38-year-oldfrom Airdrie, Alta., who conditioned the dark bay colt for Paul Olivier, an American oilman living in Calgary. He was ridden by Tak Inouye of Vernon, B.C. Allowed to go off at odds of 7-to-1, Whistling Sea’s wire-to-wire triumph at Woodbine should not have come as a surprise as he had earlier beaten U.S.-bred colts in the Woodstock Stakes and had won the Plate Trial Stakes. Trainers and horses from the west had been trying since 1944 to win the Plate. 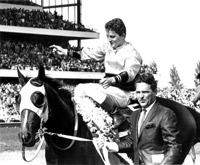 Known as the “Western Weedbender”, Johnson proved his victory with the Western-bred colt wasn’t a fluke as he won the Plate again in 1968 with Golden West Farm’s Merger, a colt from Okotoks, Alta., owned by Max Bell. Johnson, who was born in July, 1927, rode in Western Canada, Washington and California before an injury curtailed his career in 1950. His two brothers, Bunny and Eddie, were also jockeys. Twice the Johnson boys finished 1-2-3 in a race. Roy recalled it once happened at Northlands in Edmonton when Johnny Longden was an honored guest jockey.

Johnson said at one time in his career he was licensed to train in nine different states and six provinces. He headed to Ontario for the first time in 1958 and returned for good the following year for Golden West Farms, an outfit he’d trained for in Alberta and California. After opening a public stable in the east he trained stakes winners for Windfields Farm, Kinghaven Farms, Mrs. Jean Josephson and Harry Hindmarsh.

Besides his two Plate winners, he won the Prince of Wales Stakes and San Marino Handicap at Santa Anita, Calif., with Presidial for Windfields. He also won Canada’s premier juvenile races, the Coronation Futurity (Welcome Partner) and Cup and Saucer (Potential). His other stakes winners include Minsky, Gilmore, Lebon M.L., Green Belt, Return Trip, Golden Jubilee and Shy Bride. Johnson is proud of the fact that he is the only trainer with wins in the Plate as well as the Quebec, Manitoba, Saskatchewan, Canadian and Alberta Derbies. Johnson trained in the east until 1979 and continued in Western Canada until 1989. He was talked into training again in 1997 with a couple of unraced maiden 3-year-olds but gave it up before ever getting them to the races. He is now retired and lives in Calgary. 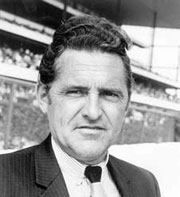