When Black Creek Pioneer Village was opened in 1954 a local notable was sought for the tree-planting ceremony. It was recalled that Florence Nightingale Graham had been born and lived on the Woodbridge, Ont., property until she was 24 years old. She eagerly accepted the invitation. But her name was now Elizabeth Arden, one of the most renowned names in the world of glamor … and horse racing when her colt, Jet Pilot, won the Kentucky Derby in 1947 for trainer Tom Smith of Seabiscuit fame.

Recognized as the creator of beauty since opening a salon on Fifth Avenue in New York in 1910, she was hailed by Fortune magazine in 1938 that as sole owner of the Elizabeth Arden Company, she was earning more money than any other woman in U.S. history. She owned more than 100 salons in North America and Europe. She also owned Maine Chance Farm in Lexington, Ky., one of the leading money-winning stables in the 1940s, ‘50s and ‘60s, as well as Barrettstown Castle Stud near Dublin, Ireland. As a young girl she had been put in charge of the horses on her dad’s farm. She claimed her father, W.P. Graham, once owned a horse that finished second in the Queen’s Plate. Her return to Woodbridge brought back memories of when she travelled to St. Lawrence Market to sell produce.

In 1931 she bought her first horse at Saratoga. It was quite natural for her to take up horse racing with the same zeal and intensity she had shown in the cosmetics industry. She insisted that Elizabeth Arden creams and lotions be used for bruises and aches, replacing the liniments normally used by her many trainers, which included Frank Merrill Jr., and didn’t like her horses wearing blinkers – they weren’t aesthetic. Her many champions and stakes winners besides Jet Pilot, included Jewel’s Reward, Gun Bow, Rose Jet, Myrtle Charm, Beaugay, Royal Blood, Star Pilot, Lord Boswell, Jet Action and Moon Dancer. Born in 1884, she died in 1966. 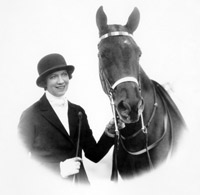