Equally at home at both the standardbred oval and the thoroughbred walking ring, Jim Proudfoot was an award-winning journalist whose columns and feature articles in The Toronto Star and industry magazines were instrumental in helping horse racing earn and maintain a significant profile in Canada. Racetrackers, large and small, famous and obscure, knew and addressed him as “Chester”. Proudfoot was sports editor of The Star during the 1980s and was considered by his peers as one of the most knowledgeable sportswriters in Canada during a prolific 49-year career. Beginning in the early 1960s his columns entertained and informed its readers of the goings on at Woodbine, Fort Erie, Greenwood, Mohawk and U.S. tracks. During his global adventures “Chester” always made it a point to visit that city’s local racetrack. 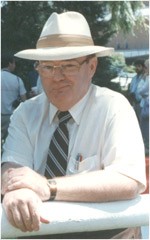 Few sportswriters have horses named after them. “Chester” was the exception. A trotter by Balanced Image, which was trained by John Hayes Jr., was named Proudfoot and earned nearly $100,000 in Ontario and the Maritimes. “Jim had a way of being able to make a point without being negative. He could undress someone without them realizing they had been tampered with,” said Hayes. Proudfoot, who was born in Kearney, Ont., won a National Newspaper Award in 1988 for his investigation into the mysterious death of jockey Dan Beckon. He raised many disturbing questions about the death, even though it was ruled a suicide. He won a Sovereign Award in 1976, presented by The Jockey Club of Canada in “The Outstanding Newspaper Story” category, an article regarding the disqualification of a 3-to-5 favorite. In 1966 and 1967 Proudfoot won the John Hersey Award from Ohio State University for his columns on harness racing. He was also inducted into Canada’s Football and Hockey Halls of Fame. His Sportsmen’s Corner every Christmas raised thousands of dollars for The Star’s Santa Claus Fund. Proudfoot died at age 67 on April 1, 2001. 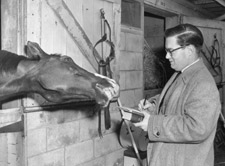