The man who masterminded Stanley Cup hockey dynasties in Montreal and Toronto was also one of the more astute thoroughbred horsemen in Canada. Frank J. Selke imported and stood Ladder, the Kentucky-bred stallion who sired Canada’s Horse of the Half- Century, Bunty Lawless. Selke also bred one of Canada’s great fillies, Wonder Where. Born in Kitchener, Ont., in 1893, Selke helped Conn Smythe build a hockey empire and Maple Leaf Gardens in the 1930s and 1940s, winning three Stanley Cups in Toronto before heading to Montreal as the Canadiens’ managing director, capturing six more Cups in the 1950s.

An electrician by trade and an avid chicken fancier, Selke was a noted breeder in both Ontario and Quebec. He was president of the Canadian Thoroughbred Horse Society from 1942 to 1945 and a director in 1947-1948. In 1934 the ill-fated Ladder had bred only a handful of mares at Selke’s farm on land he leased from Thorncliffe Racetrack on Don Mills Road before a fire destroyed the stables and 32 animals, including Ladder. His potential would never be fully realized. However, a mating with Mintwina, owned by Selke’s friend, Willie Morrissey, produced Bunty Lawless, the King’s Plate winner of 1938, who would sire Plate winners Epic and McGill and champion Windfields. 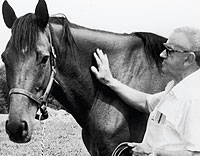 After the fire Selke headed north to King, Ont., and built Rolling Range Farm, a 220-acre breeding operation. In 1946 he moved to Quebec and Rolling Range Farm No. 2, forty miles west of Montreal. It was at this farm that he bred Wonder Where, the exceptional multi-stakes winning filly who was Canada’s Horse of the Year in 1959, defeating Triple Crown winner New Providence in year-end voting. Owned by Smythe and Larkin Maloney, Wonder Where’s incredible season helped overcome Winning Shot’s loss in the Plate. Winning Shot, bred by Selke and sold as a yearling to John Evans, finished third as the Plate favorite. Another broodmare Selke owned was Ebony Lass. Bred to Bunty Lawless, she produced B Fast, a filly who gained celebrity status when her son, Whistling Sea, became the first Western Canadianbred horse to win the Plate. Selke also stood Smythe’s old warhorse, Shoeless Joe, a very productive stallion during the 1940s. Selke died in July, 1985, at age 92.