In the 1940s and 50s, when the thoroughbred world was reveling in an era of post-war racetrack prosperity, Ted Atkinson was at his peak, one of the glamour jockeys that were house-hold names – Eddie Arcaro, Johnny Longden, George Woolf and Conn McCreary. He was known as a gentleman. Also, “The Professor”, for his love of reading the classics, such as Hamlet, between races. But the nickname he was best known and one he disliked was “The Slasher”. He earned this sobriquet because of his vigorous up-and-down whip action. Joe Palmer wrote “T. Atkinson can be depended upon to get as much out of his mounts as heredity and the trainer have put in.” One of Atkinson’s first trainers developed his “high-winding” style of whipping that earned Ted “The Slasher” appellation. The trainer did not want his horses touched in the flanks, particularly near the stifle joint. Horses whipped well up on the rump showed less tendency to swerve. In an interview with the London Evening Standard in 1993, Atkinson said, “I never hit a horse just to beat it out of him, but merely to impress on him the urgency of the situation. I can’t ever recall leaving a welt, and never had a trainer complain that I had abused his horse.” In fact, the end of his whips were always feathered. 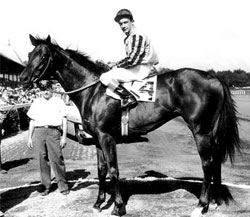 At the height of his career Atkinson twice led all jockeys North America in both races won and money earnings. He didn’t get his first ride until he was 21 and rode from 1938 to1959. In 1944 he led the all jockeys with 287 wins and was leader again in 1946, when he became the first jockey whose mounts earned more than $1 million in a year. After that season he signed on as the contract rider for the famed Greentree Stable, the outfit he started his career with as an apprentice. When he retired his 3,795 victories and a win percentage of 16 earned him induction into the U.S. Hall of Fame at Saratoga, N.Y. In 1957 he was awarded the George Woolf Memorial Jockey Award.

Born in June, 1916, in Toronto, Atkinson’s family moved to the States when he was three. He was publicized in the U.S. press as “the great Canadian rider”. Atkinson rode All British in the 1948 King’s Plate at Woodbine Park. He often rode Canadian-owned and trained horses at U.S. tracks. His greatest mounts were Hall of Famers Tom Fool, Devil Diver, Nashua, Gallorette, Capot, which won the Preakness and Belmont Stakes after finishing second in the 1948 Kentucky Derby, Olympia, Hill Gail, One Hitter and War Relic. It was War Relic (shown with Atkinson at the upper right of this page) who elevated Atkinson into the public’s eye in 1941 when he captured the Massachusetts Handicap and the famous Narragansett Special, defeating Eddie Arcaro and Triple Crown winner Whirlaway. Atkinson considered Tom Fool as the best horse he ever rode, earning Horse of the Year honors in 1953 after winning the Handicap Triple Crown -the Metropolitan, Suburban and Brooklyn Handicaps. “None of the other horses I ever rode, on their best days, could measure up with him.” Atkinson also rode Hall of Famer Bold Ruler, sire of Secretariat, and champion fillies Busher, High Voltage and Misty Morn. 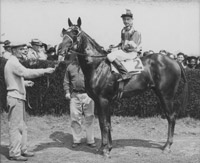 During the Depression he was working for $8 a week, loading and labeling bottles at a chemical plant in New York. A truck driver advised the youngster that “with your build and size I’d get a job as a jockey” and gave him the name of the head exercise rider at Green-tree Stable in nearby New Jersey. Not getting the break he hoped for with Greentree, he left and freelanced as an exercise rider before riding his first winner in 1938 at Beulah Park, Columbus, Ohio. In 1940 he moved to the New England circuit and it wasn’t long before the big stables in New York were beckoning. He was leading rider in New York eleven times, a record that still stands. Following his Hall of Fame career Atkinson became a racing official and steward in both New York and Chicago. He died at age 88 on May 5, 2005, in Beaverdam, Va. 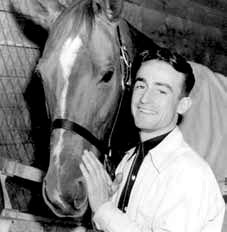