Staying Together was unlike most horses when their racing careers are over. Instead of retiring to stud, or lazing around in a farmer’s paddock, he became an international equine ambassador for the sport of harness racing at Lexington’s Kentucky Horse Park. His duties in the Hall of Champions include greeting visitors and posing for photographs, a tranquil but aristocratic pastime for a truly memorable racehorse.

In 1993 owner Robert Hamather of Hensall, Ont., watched in awe as the horse compiled a sensational season that led to Horse of the Year honors in both the United States and Canada. His list of credentials is lengthy, not the least being the fact that he retired as the world’s fastest race-winning standardbred by virtue of his 1:48.2 mile at The Meadowlands. That sensational effort also distinguished him as the fastest gelding in history. Staying Together’s winnings of $1,169,155 at age four was the largest ever by a gelding in a single season and, at that time, placed him behind only Rambling Willie. Staying Together’s 46 career victories resulted in earnings of just under $1.7 million. 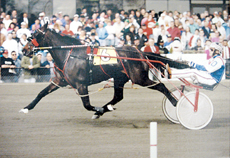 Bred by Kentuckiana Farms of Lexington, the son of Panorama was sold for $19,000 as a yearling. Bob Anderson handled Staying Together’s early development as a 2-year-old before Hamather turned him over to trainer Jack Parsons. Anderson suggested the headstrong colt be gelded, a decision Hamather agreed to somewhat reluctantly. Staying Together showed a remarkable change in ability. Under the care of Parsons he ended up winning 18 races as a 3-year-old, including the Mohawk Gold Cup and five races under 1:55. Parsons turned him over to trainer Bob McIntosh during his signature 4-year-old season, one in which he won 21 times in 26 starts. He established the world race record of 1:48.2 winning an elimination of the Driscoll Pacing Series and came back the next week to win the final in 1:49.2. A 1:52.4 win in a Graduate Series leg at Freehold was a world record for pacing geldings on a half-mile track. He won the U.S. Pacing Championship at the Meadowlands in 1:49.1. Other victories included the Breeders Crown, Canadian Pacing Derby, Stewart Fraser Memorial, American-National Maturity, Graduate Series final, U.S. Pacing Championship and the Des Smith Memorial. At Greenwood, he equaled the world record, 1:50.4, for a mile on a five-eighths mile track.

Staying Together won three races faster than 1:50, more than any other horse in history at that time and 19 faster than 1:55. Bill O’Donnell was his driver for most of the season. His 1994 campaign included six wins, the fastest in 1:50.4, and a second American- National Maturity as well as the Frank Ryan Memorial. During his career Staying Together barnstormed across North America, from Northlands Park in Edmonton to Hippodrome de Montreal, and throughout the United States, gaining necessary qualifications as a future ambassador.