Super Wave hit the pinnacle of his racing career in 1971 when he was acclaimed the season’s fastest and richest older pacer in North America. During that season, the 5-year-old won more than $214,000, took a season’s record of 1:57f and was voted the CTA’s Horse of the Year, Older Pacing Horse and the USTA’s Older Pacing Horse of the year. Super Wave was owned by Dr. George Boyce of London, Ont., and was trained and driven by Jack Kopas. A son of Shadow Wave, Super Wave was bred by Almahurst Farm of Lexington and was a $5,500 yearling purchase by Dr. Boyce. When he retired after 5-year-old season he had earned $481,370 while winning 40 races and finished in the money in 80 percent of his 85 starts.

Super Wave was a multiple stakes winner at ages two through five and held a number of track records at Garden City, Batavia Downs, N.Y., Greenwood, Rideau Carleton and Richelieu Park. At two he captured a heat of the Battle of Saratoga, Lastic Grattan, Batavia Downs Colt and several legs of the Canadian Juvenile Circuit Series. He took a time trial record of 1:58.4 that year. In 1969 he was the CTA’s 3-year-old pacer of the year when he won the prestigious Queen City Pace (now the North America Cup), the Battle of Brandywine, Blue Bonnets Grand Circuit Stakes, Batavia Downs Colt, Ed Sullivan Pace, Massey Ferguson Pace and Trans Canada Pace. His four-year-old season was impressive as well, winning the General Mad Anthony at Brandywine, Connaught Cup, heat of the Canadian Pacing Derby and invitation events at Blue Bonnets, Greenwood and Liberty Bell.

At five he won the National Pacing Derby, Dan Patch Pace, General Mad Anthony Pace, Frank Ryan Memorial, Margaret Lloyds Memorial, Beaches Pace and invitational events at Blue Bonnets and Roosevelt. He initially was retired to stud at Lana Lobell Farms, Pa., but was later moved to Nashville Stud in Kleinburg before ending his career at Mac Lilley’s farm near Dutton. Super Wave sired 32 winners of $100,000, including Super Clint, who shared a world record for a 3-year-old pacing colt on a mile track with Governor Skipper and BGs Bunny in 1977. His daughters produced 17 performers with records of 1:55, including world champion pace mare Milynn Hanover. 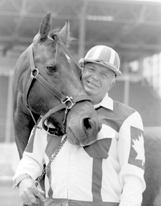