A foal of 1912, The Exposer was a trotting son of The Exponent-Emma Conductor. He began his career in Springfield, Ill., raced briefly on the Grand Circuit before being sold to Harry C. Jewett, a prominent grocer from Fredericton, N.B.

The big bay stallion earned a reputation for bad manners, a trait that obviously prompted his sale at age six. It was suggested it took seven strong men to race The Exposer – two to hold him, two to harness him, his driver and two men to open the gates when he was ready to go on the track. Once on the track he was all business. However, he was raced in a long-shaft cart. According to his driver, Bill Sharon, “it would have been suicide to race him in a sulky.”

Under Jewett’s ownership in 1919 The Exposer shattered Maritime and Canadian records for trotting stallions on a 1/2-mile track, lowering it to 2:09 ½ at Chatham, N.B. The clocking was not only the first sub 2:10 trot mile over a half-mile track in Canada, but also at the time the fastest mile ever trotted or paced in Atlantic Canada. His track record at Chatham stood for a quarter of a century, finally bested by Hall of Famer great Watchim.

The Exposer established trotting records in the Maritimes at Fredericton, Chatham, Moncton and Springhill. His 2:13 1/4 record at Springhill in 1920 came after the horse was gelded. In 59 starts (189 heats) from 1914 to 1929 The Exposer recorded 57 wins and was first, second or third in 61 percent of his races. His world record was taken at Milwaukee, Wisc., where he actually lowered several world standards in a seven-heat race. He took his lifetime mark of 2:05 as a three-year-old at Springfield, Ill. During his career he held six Canadian stallion and gelding records. 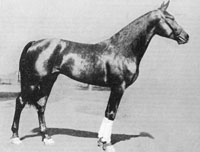